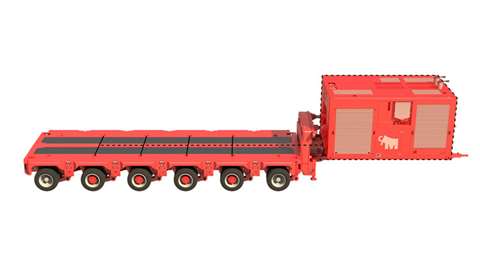 A typical road transport of very large and heavy cargo on multiple trailers can require as many as four trucks at the front to pull and steer, plus as many as four at the rear to push and help with braking. The mechanical connection between truck and trailer limits manoeuvrability and the trucks have to drive back empty, Mammoet said. Empty TPAs can be hauled back by one truck with the hydraulics set to free wheel.

The TPA is based on the Scheuerle K25 trailer fitted with a power pack unit (PPU) that hydraulically powers 4 of the 6 axle lines. Depending on the configuration PPUs are mounted at one or both ends of the trailer or they can be mounted on the back of the prime mover to replace traction ballast.

Power for the TPA is from a 1,000 hp, V12, MTU diesel engine offering a traction power of more than 40 tonnes. Each TPA gives a drawbar pull equivalent to two fully loaded prime movers so one TPA can replace at least two trucks. Advantages include reduced transport length and better manoeuvrability. One driver operating the system greatly reduces communication errors and improves safety.

Road speed with TPA is up to five times that of using self propelled modular transporter (SPMT) for one third of the fuel consumption, Mammoet said. The TPA is designed so that above the maximum speed of 25 km/h the PPUs shut off and the truck can pull to a highway speed of up to 80 km/h. It means that larger loads can be transported further and faster.

Mammoet said that transports of more than 2,000 tonnes over longer distances using multiple rows of trailers with one truck at the front and one at the back could become a reality. Scheuerle is building two TPA prototypes in a joint venture with Mammoet for field testing.