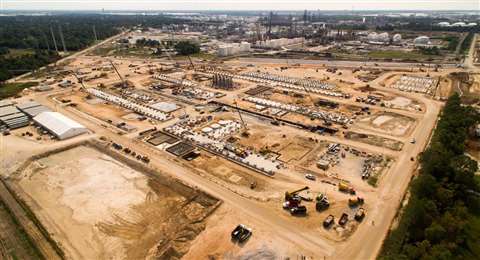 Mammoet successfully transports the first equipment to Westlake, Louisiana for the Sasol project

Global heavy lifting and transport company Mammoet successfully completed the transport of three large boilers from Altamira, Mexico to the facility in Westlake, Louisiana for international integrated energy and chemical company, Sasol. The boilers were the first major pieces of equipment to be transported up the heavy haul road for Sasol’s latest project.

The transport journey started in December 2015, when the first of the three boilers were loaded out onto an ocean-going deck barge in Altamira, Mexico. A larger barge was used because it had enough buoyancy to receive the 1,000+ tonne of weight of the boiler coming from the tall dock. The boiler was then sea fastened and brought to the Port of Beaumont in Texas, where it was transloaded to a smaller inland barge that could deal with further restrictions on the route to the final offloading site.

At the Port of Beaumont, the two barges were fastened together and a ballasted roll-on, roll-off (RoRo) operation from barge to barge was performed where each barge was individually ballasted to maintain their draft. Although four days were initially planned for the operation, the crews performed all activities in just three.

On 6 January 2016, the first boiler was offloaded from the barge and transported 3.2 miles on 48 axle lines of self-propelled modular transporters (SPMT) to the Sasol site and set down on the foundations. Once the SPMT trailers were removed, 48 axle lines of self-propelled Goldhofer trailers were brought in to set down the first boiler at the final installation height. The transfer was needed because the route between dock and plant was too narrow for the Goldhofers.

Mid-January, the ocean-going deck barge went back to Altamira, Mexico to load out the remaining two boilers. In three days, both boilers, along with 24 additional cargo items, were loaded and seafasted for the journey to the USA. The boilers were then safely delivered to the Port of Beaumont. Using the same method as for the first boiler, both boilers were transloaded and finally delivered to the construction dock in Westlake.

On the night of January 31st, both boilers trailed the same route on 96 axle lines of SPMT to the Sasol site and followed the same installation process as boiler number one. The two boilers were transported and set down into place in less than eight hours.