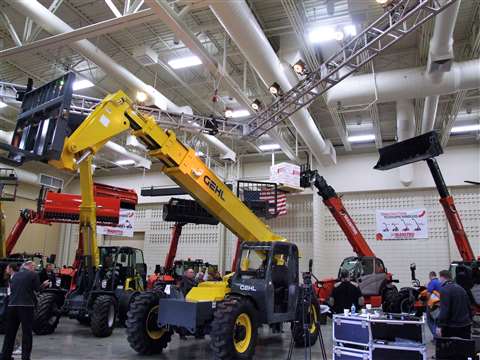 Gehl, Manitou and Mustang unveiled a line of new and improved telescopic handlers at their "Unlock the Future" event on January 26, 2017 in Waukesha, WI.

With AC/DC blaring over the sound system and multi-colored strobe lights bouncing around the massive exhibition center, Washington County Fair Park gave off the impression that spectators were waiting for a big rock and roll show. It was easy to pick up on the excitement in the air, even at 9 a.m. in “warm and fuzzy” West-Bend, WI. While it wasn’t a concert, customers were still eager to take a look at all of Gehl, Manitou and Mustang’s new equipment, and waited anxiously for the curtain to drop for the highly anticipated reveal.

Gehl, Manitou and Mustang are starting off 2017 with plentiful opportunities for both dealers and customers with new and modified machines added to their product line-up.

“A smart person once said, opportunity knocks on your door, what are you supposed to do? Answer the door right?” said Brian Rabe, product manager, CEP division, Manitou Americas, Inc. “Well, today what we’re going to show you is something a little different. We don’t want to wait for opportunity to show up. Let’s drive over to opportunity’s house and kick the door in.”

That can-do attitude was evident through every aspect of the product presentations as the companies presented newly designed machines with customers in mind. ALH was able to get a sneak peek on some of the newest telescopic releases.

First on the show floor was the RS5-19 GEN:3 and MTA 5519 Series II telescopic handlers, that featured replacements of a two stick system to a versatile single stick system. According to Rabe, the biggest advantage to this change is being able to shift forward, neutral and reverse while boom functioning without having to take your hands off the steering wheel.

These rental-focused telehandlers can also be used as a gateway product to get customers in a machine they can use for various jobs, and then perhaps rent bigger machines later down the line.

There will also be the addition of new DL Series Tier IV telescopic handlers which will have a range of 7,000-12,000 pounds for pick and carry, reaching heights from 40 feet, 4 inches to 55 feet, 5 inches. In addition, a tight turning radius of 12 feet, 2 inches offers maneuverability in confined spaces.

Agriculture and concrete/construction are the primary markets for the new telehandlers, allowing users to be able to lift over mixes and stack bales in an area where they might otherwise be unable to get a large unit in.

“With concrete and construction, this is a little bit smaller market globally, and in the United States especially, but it’s something that’s growing,” said Rabe. “Something to think about too, we’ve had a lot of customers over the years with skid steer loaders. As horse power has crept up on those, these machines use less horse power which means less fuel, which means as long as you have the space to put the machine out where you’re running it, then the operator can save some money by running a wheel loader versus a skid. So it’s a good compromise between products.”

The Gehl RS9-50 and the Manitou MTA-9050 were presented as true production machines. With a 50 foot boom, and a 9,000 pound capacity that can take 5,000 pounds to 50 feet high without outriggers, the machines now possess a larger working range than any other competition on the market. In addition, there’s no longer a competitor in this particular class that’s targeting the mason industry. There are 3,000 plus existing units that are going to be called for replacements within the next couple of years.

Rabe said that in making a move on a less publicized industry, mason contractors will drive a lot of sales for dealers going forward, and as of now there’s virtually zero competition in any other company.

Along with a wide range of new products, the companies will also be working toward improvements in the parts business as they implement a worldwide replenishment tool and a pricing tool. There will also be focus on refreshing documentation and making it more uniform.

Bringing another “tool to the toolbox,” Gehl, Manitou and Mustang are looking positively to the growing market and successes of 2017.