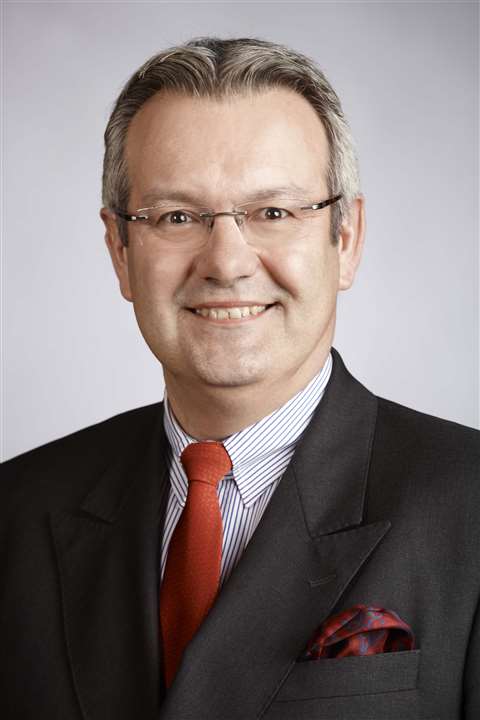 Manitou interim CEO Dominique Bamas is planning a new era for the company. He talks to Euan Youdale about new markets, expansion of the access segment, his own future, and, of course, telehandlers.

Dominique Bamas is passionate about Manitou’s future – no surprise considering he has been a friend of the Manitou family for 25 years and an independent board member since 2009.

He stepped in when Jean Christophe Giroux stepped down from the CEO role in March this year and will remain in charge until a replacement is found. One thing is for sure, the company, with its 3,200 employees and €1.3 billion annual turnover, will take its time to find the right person.

“The board of directors asked me to be CEO for this transition period and I agreed because I am very close to the family. We will need a certain period of time to find a new CEO and we don’t want to do it on a hurry. The family wants someone who can be very close to them, and so they were confident to work with me for this period.

“The profile of the new CEO will be more operational and less financial,” says Mr Bamas, “The objective is to have a CEO that will be close to the field and close to the commercial side of things - very hands on.”

On the new CEO’s agenda could be the opening of an assembly plant in Brazil sometime in the next two years. Mr Bamas said the assembly plant would be its only new facility in the immediate future, as the company’s main focus of expansion would be through new dealerships, and the expansion of existing ones in countries like Russia. “It’s very complicated to import products to Brazil - import duties are very high, so we would need to have a small assembly plant just to avoid taxes.”

The new depot would assemble a range of Manitou products. “But assembly plants are not our main objective at the moment, we already have eight assembly plants: four in France, one in Italy and three in the US. If we have 10-15% growth each year in the next five years, we will probably need more plants, but that is not the case for the moment.”

Concerning other markets, Bamas added, “The main issue is to find the right go to market strategy to develop our brand. We have good products and industrial potential but in many countries we have a small market share, so we want to develop that.”

Another of Manitou’s strategies is to double its output of access equipment within five years. Powered access accounts for about 10% of production, and this will be increased to 20% - more on that subject later. Despite this, there are no plans to purchase other existing companies. “It will be organic growth. We don’t need to bother with new companies; we are a family owned business; we are close to our products and our customers and we want to develop this.”

Manitou’s biggest market is in its home country of France, followed by other Northern European countries and North America, following its acquisitions of Gehl and Mustang.

The company is now setting its sights on the so-called BRIC nations, with, as mentioned a special focus on Brazil and Russia. “We will try India and China but they are more difficult because the products we produce are not really well known, so we have to convince the market first to use telehandlers, and that’s before we convince them to use Manitou.

“Our strategy in Russia is to have a very dynamic dealer base – we already have good dealers but we probably want more dealers and we want to help our current dealers to grow. I would say we need to increase our dealers by about 20%. But we have to help them because they need a good financial base – so many millions of Euros of working capital. So it’s a financial issue at the end of the day because it would be difficult for such a company in Russia to find the right financing programme.”

Mr Bamas is quick to add that Manitou will not hold back on new innovation. “The DNA of the company is technology, innovation, design; so we will not change that, but we have to change our mindset a little to be able to address different markets.”

One of the main hurdles today is the new emission laws, which have reared their heads at the same time as major global recession. “On the one hand we are reducing our price, and on the other hand we have the engine regulation problem. We have to change all our engines and it’s much more expensive and not always cost effective for the client. It’s very good in terms of environment but when you are involved in business and you have to survive, most of our customers ask, ‘what are my benefits by using your new engines?’ - the reality is it’s not cost effective.”

The varying regulations around the world also cause headaches, says Mr Bamas. “We have three factories in the Sates, but the regulation for emissions are different in Canada, US and in California. Then you have Europe and the rest of the world. Industrially and financially it doesn’t make senses. Maybe in five or 10 years every country will have the same regulation all around the world, I hope so, but we all have to survive those five to 10 years.”

Historically, the access equipment segment of Manitou has had a much smaller profile than the telehandler side of the business which represents a lion’s share of turnover. But that is set to change, according to Mr Bamas.

“I really believe in the access equipment market, which probably has more potential than the telescopic handler market. Everyone knows Manitou is a telescopic handler manufacturer and it’s probably one of the most famous brands in that area, but there are less customers who also know we are a player in the access platform market. If access is 10% of our business, then I would hope that we could at least double that in the next five years, and I think we can.”

However, Manitou will not look to expand into the popular scissor arena, rather choosing to concentrate on articulated and telescopic booms. Concerning scissors, Manitou has a cross selling agreement with Terex AWP under which Manitou sells Terex-produced rough terrain diesel scissors and electric slab scissors under the Manitou brand, while Terex sells Manitou-produced self-propelled vertical masts under the Genie brand.

“Scissors are the largest part of the market,” concedes Mr Bamas, “but you see more and more articulated platforms. So we are looking at new products and geographical expansion. We want to develop our access equipment all around the world.

Manitou already has a dedicated facility in France for access equipment, which it has invested in heavily. In two to three years Mr Bamas hopes that this facility will be working to capacity. “I hope do have so much development that by then we will have an industrial dilemma,” he adds.

Talking of new boom products, Mr Bamas said there were some in research and development. “Obviously we have a number of projects in research and design, and I hope in next two years we will be able to go to market. “The main focus is to have a full range of products for our dealers to work on. It’s not about trying to go higher and higher it’s about having a comprehensive range within the core market.”

The company’s tallest boom is the 28 m self-propelled telescopic 280 TJ. “But I am not spending money looking to a 33 m then a 35 m,” Explains Mr Bamas, “That’s not the main issue, the main issue is to develop a full range of products to sell around the world – because France is now saturated.”

With his considerable knowledge and experience, hopefully Mr Bamas will be around for some time to lend support to the new CEO, unless, perhaps, Mr Bamas has thoughts of taking on the role permanently. “Of course it would be a great challenge - I have known Manitou for 25 years, and I have been involved with many different aspects of this company. “It’s a great family business, with many, many attractive aspects.”