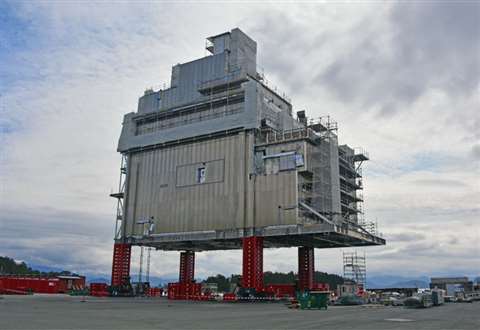 ALE jacked a 1,000 tonne module 13 metres with its Mega Jack 800 operating for the first time in Norway

It was the highest lift that the hydraulic jacking system has been used for to date and it was working for the first time in Norway. Ivar Aasen contracted ALE for the lift and for all sites moves utilising self propelled modular transporter (SPMT). With the module jacked up it was then mated with the lower LQ sub-modules using 72 axle lines of SPMT.

Richard Johnston, ALE project engineer, said, “It was great to be involved and work with such a great team to perform this milestone job. Our Mega Jack 800 is the only system on the market that could jack-up to the height required, approximately 13 metres, without having to provide bracing. Combined with the fact that it only took five hours to execute the jack-up, the system provided the quickest, easiest and, therefore, most cost-effective solution on the market for the client.

“This is also the first time the Mega Jack 800 has been used in the oil and gas sector, showing its capabilities to work across different markets. The Mega Jack 800 is scheduled to perform another jack-up of a bigger and heavier piece in Norway in October 2015.”

It was a ten day project and the jack-up operation took five hours. For the final phase of the contract ALE will load out the 1,600 tonne combined module onto a barge.