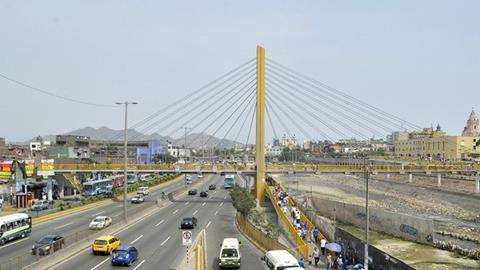 A major road project in Peru’s capital, Lima, is underway to better connect 11 of the city’s districts.

In excess of US$700 million is being invested to build and upgrade 25km of road, 9km of which will be a new express road to Callao, called the Yellow Line Expressway, and 16km will be an upgrade to the Via de Evitamiento.

The renovation of the Via de Evitamiento includes the construction of an additional 9km lane in both directions; the renewal of pavements; the building of nine new pedestrian bridges with ramps and, in some cases, elevators; and the improvement of 15ha of green space.

The works also include the construction of a tunnel under the Rimac River, which will be part of a 1.8km road extension that includes 13 viaducts and will provide a new alternative for transportation between the east and west ends of the city.

The project is part of a public-private partnership granted by the Municipality of Lima to the Lamsac consortium, which is owned by Vinci Highways and is responsible for the concession of the Evitamiento road and the construction and operation of the Yellow Line Expressway.