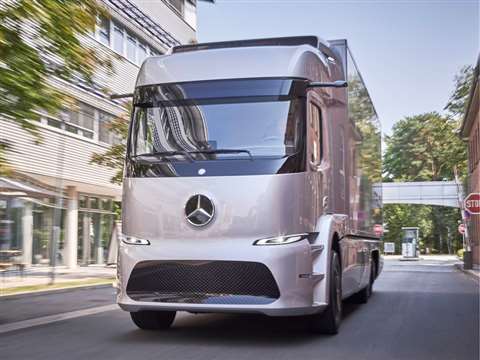 Mercedes-Benz Trucks, part of Daimler Trucks, has announced its intention to bring what it describes as 'the world's first small series, all-electric, heavy-duty truck' to market in 2017. This follows positive reaction to the idea at last year's International Commercial Vehicle Show.

Named the Urban eTruck, the vehicle has a 25 tonne gross vehicle weight and a range of up to 200 km. With zero emissions, little noise, and a payload of 12.8 tonnes, Mercedes-Benz Trucks claimed the Urban eTruck offers an impressive economical and environmentally-friendly concept. Initially, a low two-figure number of units will go to customers in Germany, with more to follow destined for elsewhere in Europe. These vehicles will be deployed in real-life transport operations. Mercedes-Benz Trucks said it aims to learn from genuine applications and requirements, coupled with customer feedback, to further optimise the electric truck’s concept and system configurations. The tests will include use in shift operation, charging times, plus battery and range management. 18- and 25-tonne models will be equipped with refrigerated, dry box and platform bodies for various applications. Together with a special charger, which takes into account the increased demands on a truck, the vehicles will be handed over to the customers to use for a period of 12 months, during which they will be supported by Mercedes-Benz Trucks’ road testing department. The usage profiles and areas of application will be recorded, and the knowledge gained compared with expectations.

Stefan Buchner, Head of Mercedes-Benz Trucks worldwide, commented: “We are currently talking to around 20 potential customers from the disposal, foodstuffs and logistics sectors. With the small series we are now rapidly taking the next step towards a series product. By 2020 we want to be on the market with the series generation.

"When it comes to future technological issues we have set the standards in the sector, for instance with regard to electric and autonomous driving plus connectivity. 2017 will now be our year of implementation: step by step we are developing the vehicles and systems to achieve market maturity.”

The Urban eTruck is part of a comprehensive electric initiative from Daimler Trucks. The company predicts a rise in demand and a lowering in cost of batteries. "Daimler Trucks is expecting the costs for the batteries of an all-electric truck to have fallen by a factor of 2.5 between 1997 and 2025 – from 500 euros/kWh to 200 euros/kWh," the company stated. "At the same time the energy density of the available batteries in this period will rise by the same factor, from 80 Wh/kg to 200 Wh/kg."