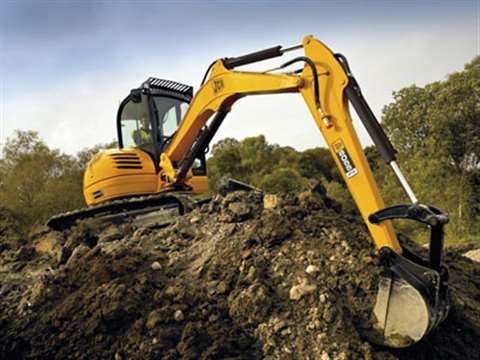 This year JCB has launched three new mini excavators including two versions of the 8055, which will be available as either a reduced or zero tail swing model.

Mini excavators remain a popular choice for contractors in the European market and many new machines have already been introduced this year, most of which feature the latest in zero tail swing technology. Becca Wilkins reports.

Short and zero tail swing mini excavators have provided a solution to working in restricted European city centres and other confined spaces and their popularity is reflected in the plethora of new models introduced to the European market so far this year.

At Samoter, Hitachi launched three new ultra-short tail models, including the smallest in the new range - the 6 tonne class ZX60USB-3, as well as the ZX85USB-3 and ZX135US-3. New mini excavators from JCB at the show included the 8020 and two versions of the new 8055, while Komatsu introduced its new Dash-3 Series, ranging from 1,4 to 4,7 tonnes.

According to a spokesman for Komatsu the Dash 3 models now feature increased operator comfort. "Despite compact dimensions, Dash 3 mini-excavators offer plenty of room to operators of all sizes: once seated, the spacious and obstacle free floor lets even the tallest operator move his legs and feet freely," he said. The adjustable seat and the ergonomic adjustable controls further improve the operator's environment, he added.

Speaking for Komatsu Utility Europe at Samoter, Andrea Schiavon, told CE, "Zero tail is not only the future but also the present because there are now only one or two competitors still offering what we call the conventional models, but apart from them all the others either already have or are moving from conventional to zero tail." He added using a zero tail model is the best solution to avoid causing damage to the machine when working in a confined space.

Komatsu made the decision to change its mini excavators from conventional to zero tail versions three years ago, with exception of the 1 to 2 tonne machines.

"The zero tail is less stable and these machines (1 to 2 tonne) are very small and if you reduce the tail the stability is not enough. But from 2 tonne and up the trend is to move to zero tail," Mr Schiavon said.

Based on JCB's 8045, the 8055 will be available as either reduced or zero tail swing and compete in the 5 to 6 tonne class. The machines will replace the existing 8052, the company stated. The 8020, based on JCB's 801 series of easier to service, easier to operate and more comfortable machines, will compete in the 1,9 to 2,3 tonne operating weight class and is positioned between the existing 8018 and 8025 models.

A spokesman for the company said, "With reduced rather than zero tailswing, the 8020 specifically targets the European market where recent towing regulations and the increased popularity of ‘crew cab' style pick up trucks makes this machine the largest that can be legally towed behind this type of vehicle."

He added the 8055 is set to make its mark in the increasingly competitive mini/midi excavator market in both Europe and North America.

Also at Samoter, Ammann Yanmar introduced its fourth generation of the Universal ViO zero tail swing mini excavators - the ViO50 and ViO57 models. The company said key features of the machines include ease of maintenance, reliability and productivity.

Bobcat, meanwhile has introduced several new machines in the 1 to 2 tonne class, including the E08 and E10 micro excavators - the latter being a zero tail swing model; a new 321 mini excavator and an enhanced version of the 323 mini excavator.

Demand for mini excavators once again defied all forecasts in 2007 by showing a +13% gain, with sales reaching an all-time high of almost 71000 units. According to David Phillips, managing director of Off-Highway Research, while demand in 2008 is likely to fall but remain higher than in 2006, with the "recent rash of orders and the large and relatively new population of machines," sales are likely to stabilise at around 58000 units in the medium-term future.

The largest markets all continued their strong patterns of growth during 2007, according to Mr Phillips, particularly in Germany, where sales rose by +15% to 11000 units and in the UK where growth witnessed a +15% increase to12800 units. Italy was demoted to the second largest market, with 14300 units and demand in the fourth largest market, France, also rose by +23% to 10350 units.

"Significantly, there was also substantial growth in the smaller countries, most notably, the Netherlands, Denmark, Ireland, Belgium and Switzerland," Mr Phillips added.

Speaking to CE, Paul Burger, general manager, international sales, for Hitachi Construction Machinery said, "The European mini excavator market has gone through the roof - the UK market has gone up again year after year, the German market has done extremely well, Italy is stable and France is up as well." He echoed Mr Phillips' sentiments and said smaller markets such as the Scandinavian countries are growing. He added Eastern Europe is the only market where sales are not so prolific because the region is predominantly a backhoe loader market. But, he said traditional backhoe loader markets are starting to become more interested in mini excavators.

Mr Schiavon agreed demand in Eastern Europe is mainly focused on backhoe loaders. Meanwhile, he said Spain, the Netherlands and Denmark are growing markets for the company. According to Mr Schiavon the Eastern European market will begin to accept mini excavators once the benefits of the machine become obvious, although, he said, this would not happen in the next four to five years.

Mr Schiavon said, "The most important country for us is the UK, then Italy, France and Germany - they are the four major markets for mini excavators. The UK became the largest market in Europe last year, it was Italy before and now the UK is going very well and we expect the same situation next year."

Hitachi's main focus in Eastern Europe is to grow the Polish market because this is the area of Eastern Europe in which the company currently sells most of its mini excavators, according to Mr Burger. "And although it's still four years away the country has to organise the European Football championships in 2012 with the Ukraine and that kind of thing has always been a massive boost for infrastructure," he added.

The versatility and size of mini excavators makes them a popular choice for the rental industry. "Every time a rental company's management feels cheerful, it buys mini excavators, Mr Phillips said.

According to Komatsu its new Dash 3 models are "perfectly adapted to the rental business," with increased control and safety, operator comfort and easier maintenance. Mr Schiavon said European rental companies in particular see the benefits of the zero-tail machine.

The rental business for Komatsu is stable he said, "but we are talking about a demand of between 55 to 60% growth and it cannot grow more than this," he added. "In the UK for example, the most important market for rental, the demand is about 85% and there are other markets like Italy where the demand for rental is very low, about 20 to 25%. The average demand in Europe, we estimate, because there are no official figures, is about 55 to 60% - more or less stable."

According to Mr Schiavon these figures may change by one or two percent in the coming years, but no more than that.

Manufacturers are aware the demand for mini excavators in Europe has reached the top of the current cycle and is now likely to start declining.

Mr Burger said, "The markets can't get much better than they are today. I can't see any markets growing another 10 to +20 % than where they are now. Spain could be a possibility, but it's not financially all that stable at the moment so I don't see that market increasing. Apart from that I can't see any other county in Western Europe where we could a expect a large increase of mini excavator sales this year or next - they are all at their peak."

According to Off-Highway Research's Mr Phillips, forecasting demand for mini excavators is always difficult, "for the market invariably outstrips any forecast that one optimistically makes."

In the medium-term future he said the market would stabilise. "Certainly (this is) a downturn, but a relatively modest one as rental companies will want to update their fleets on a very regular basis," he added.