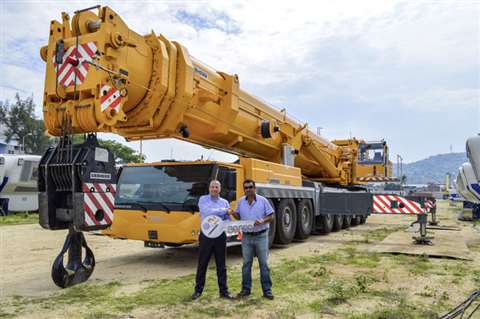 Liebherr-Werk Ehingen has delivered its 30,000th mobile crane, to crane and heavy load contractor Grupo DPH, based in Mexico.

The 500 tonne capacity LTM 1500-8.1 is also the 450th unit of this model to be delivered around the world. Jorge Fernandez, owner of Grupo DPH, said, “Liebherr cranes have always had a good reputation and since Liebherr has had its own location here in Mexico, I know that I can rely on the company's excellent after-sales service for my machines. That is why I decided on Liebherr.”

The LTM 1500-8.1 was handed over in the port of Salina Cruz in the south of Mexico and is being used to load wind turbine generators at Grupo DPH’s warehouse, which is acting as a distribution centre for wind power plant manufacturer Vestas. The turbines are being shipped to wind farms in Mexico and further afield around Latin America.