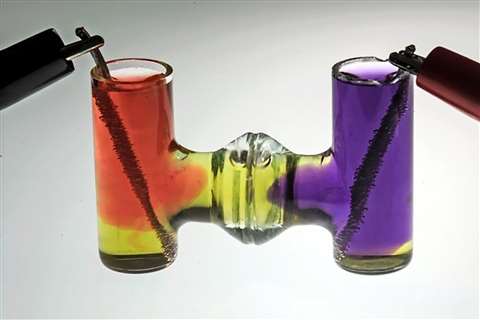 A team at the Massachusetts Institute of Technology (MIT), in the US has created a way to make cement without heating, potentially eliminating the carbon produced in the process.

Portland cement, the most widely used variety, is made by mixing limestone with sand and clay and then fusing them together at temperatures around 1,450°C.

The standard method of producing Portland cement calls for temperatures of up to 1,450 degrees Celsius. During the process, carbon is emitted from the fuel used to in the heating process and the limestone used in the mix.

Altogether, it has been estimated that cement production accounts for 8% of global carbon emissions.

The process that the team has developed involves the use of electrochemical processes rather than heat. Firstly, limestone is dissolved in acid then placed in a tank with an electric current passing through it.

This splits water molecules into oxygen and hydrogen, creates an acid at the positive electrode and an alkali deposit of calcium hydroxide at the negative. This deposit, which forms in flakes, can then be used to produce Portland cement.

The results were published in the Proceedings of the National Academy of Science, in a paper by Yet-Ming Chiang, professor of materials science, and researchers Leah Ellis, Andres Badel among others.

Chiang said, “About 1kg of carbon dioxide is released for 1kg of cement made. That adds up to 3-4 gigatonnes of cement and of carbon dioxide produced annually, and the number of buildings worldwide is expected to double by 2060, which is equivalent to building one new New York City every 30 days.”

So far, the team has demonstrated the process at laboratory scale, but the researchers said it could be scaled up to an industrial process.