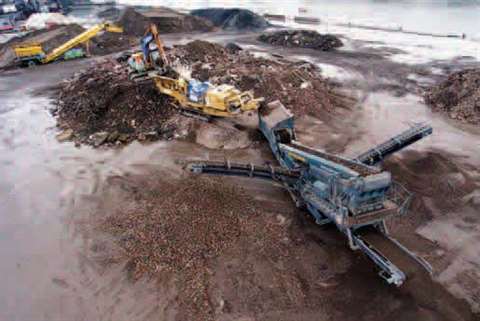 Blue Machinery's new Chieftain 1800 Triple Deck screen has a maximum output of 500 tonnes/hour, depending on mesh sizes and material types. It is shown here fitted with a x 5 triple deck screen unit.

According to equipment manufacturers, there are two clear trends in the crushing and screening sector. The first is the continued move towards mobile machines, the second is the use of electronic control systems.

Metso Minerals marketing manager, John Stolowski, told CE, “The evolution of the track mounted crusher has been the biggest trend in crusher development in recent times. The reason? Well the price has come down for a start, then there's ease of set up and transportability.

However, according to Per Hedval, Sandvik's Rock Processing process specialist, if a plant has a throughput in excess of 500 tonnes per hour – about 1 million tonnes per year based on eight-hour days and five-day weeks – large fixed crushers and screens will be the best option. Mr Hedval told CE that mobile plants, which typically have a capacity of up to 250 tonnes per hour, are simply not big enough to handle these sorts of capacities.

It is quarries and applications where throughput is less than 250 tonnes per hour that mobile machines come into their own. The large investment involved in setting up a fixed crushing and screening plant would be uneconomical for such relatively small production volumes.

Indeed, one of the main drivers for the rising popularity of mobile crushers and screening units is a trend in many countries towards smaller quarries with this kind of capacity.

The reason for this is based on the human and environmental impacts. By definition, smaller quarries have less impact on the environment. There is the obvious point that less extraction means less direct impact, but there are also knock-on effects. For example, a lower production volume at a site means there will be fewer truck journeys to and from it.

This situation favours mobile crushers and screens. Part of the reason is that they tend to be smaller than fixed plants, so are naturally matched to lower production volumes. The other point is that mobile units can be easily moved between sites, so a company that operates a number of quarries in a particular area may be able to do so by investing in just one set of crushing and screening equipment, plus trucks and trailers of course.

UK-based KSD Recycling Ltd's new Fintec 640 Screen is currently working as a primary screen to screen out soils from concrete prior to crushing. It is fitted with a steel apron feeder, fingers on the top deck at a 50 mm setting and cascading fingers on the bottom deck at a 10 mm setting.

According to Gerald Pratt, chief executive of HR International Crushing and Screening Ltd, there are other reasons for the move towards mobile plant. Mr Pratt told CE, “We have seen many operators move towards smaller, mobile plants of 200 to 250 tonnes per hour, particularly in the UK where a certain degree of rationalisation has seen many smaller quarries swallowed up by larger operators. When this happens the kit comes out, or is mothballed. However, when demand goes up the mobile kit comes out and is moved to where it's needed.”

There are a few different options when it comes to types of mobile machinery. According to Mr Hedval, tracked mobile units are best if the owner intends to move them more than 30 times per year. If fewer movements are planned – between five and 30 per year – wheeled units would tend to be a better investment choice. Below this – up to five movements per year – the optimum solution is likely to be portable ‘fixed’ plants.

PROFINK GMBH, OWNERS OF THE FIRST RUBBLE MASTER RM70 HAS COMPLETED ITS FIFTH job since buying the machine in October 2004. The apartment block demolition in Bottrop called for an extremely quiet machine and a quick delivery schedule. According to managing director Heiko Fink the RM70's almost silent operation, compact dimensions, and an overall weight of just 20 tonnes helped Profink win the contract. “The RM70 can easily be transported on a three-axle low-loader, quickly and easily set up anywhere ready for operation in just 10 minutes. We don't need permission to transport our equipment and are therefore ready for action faster,”said Mr Fink.

At the site Profink crushed brick rubble, concrete and other materials. “The main criteria were limited space on site and a capacity of 500 to 800 tonnes/day. After processing, the material was used on site to fill the existing basement and create a smooth surface,”added Mr Fink.

Crushtek's new Hydrotrack Hybrid's jaw crusher makes it particularly suited to recycling applications because the crusher can reverse, which prevents blockages from developing.

The use of mobile crushers also allows a change from traditional quarry working methods. Rather than hauling blasted rock from the face to a fixed crushing and screening plant – a long journey in many quarries – the use of mobile units means the primary crushing stage can be carried out next to the face itself. Tracked machines can be moved in close when its time to crush, and shifted out of the way during blasting.

The advantage of primary crushing at the face is that it cuts out the process of hauling large rocks over long distances. Once crushed, material is easier to handle and transport, and may even open the door for conveyor systems to move material from the face to fixed secondary and tertiary crushers and screens.

This may not reduce the total distance that material has to travel from the face to the final stockpile, but it can help reduce the transportation of bulky material. The advantage here is that such a system could reduce the need for large haulers and loaders, which cost a lot to run in terms of fuel and other consumables such as tyres.

Besides pure quarrying applications, mobile plants are used in other areas of the industry. They can often be found on construction projects taking place in rocky terrain – particularly road building schemes. Once rock is excavated, often by blasting, the mobile crusher is used to reduce it to a size where it can either be trucked away and disposed of off site, or reused as aggregate on the project.

There is also a growing market for mobile crushers in the demolition and recycling industry. Many European countries impose a tax on waste material being dumped into landfill sites and this, along with other legislative devices, has provided a huge incentive to recycle old building materials. This has opened a market for crusher manufacturers, which have seen their machines being used to recycle concrete, masonry and asphalt. Machines used in this sector tend to be small, so they can be easily transported by road, and fit on cramped city sites.

Besides the move towards mobile units, another discernable trend is to include electronic control systems on crushing and screening machines.

Powerscreen's new Warrior H3S screening plant is suitable for stone, sand and gravel, recycled concrete and asphalt. Maximum throughput is 800 tonnes per hour, depending on material and screen size.

E-Mak's simge challenger is a closed crushing, screening and stockpiling aggregate plant that can be directly integrated into an asphalt and/or concrete plant. It uses a secondary stage crusher and multi-layered vibratory screening unit to produce five product sizes – 0 to 5 mm, 5 to 12 mm, 12 to 19 mm, 19 to 22 mm and 19 to 32 mm. Working a 10 hour shift it is capable of producing 2500 tonnes of asphalt or concrete per day.

Extec's track mounted E7 is suitable for screening heavy over-burden at the quarry face (shown), prescreening/scalping prior to being fed into a crusher and recycling construction and landfill waste.

Such sophisticated systems can provide a range of useful features and information to quarry operators.

According to Charles Hopper, design engineer at Terex Pegson, its 1000SR's PCL control system is designed to do just that. Mr Hopper told CE, “The PCL control system uses a Can Bus so isolating any problems is easy. It's about simplifying operations, helping our customers and reducing operator error.”

By tracking production and regulating crushers and screens, the machine owner can get an accurate picture of real-life production volumes and costs. There is also a ‘preventative’ side to such systems – they can protect crushers against overloading, and allow different units in the process to ‘talk’ to each other.

Another interesting machine that embodies both trends is Sandvik Rock Processing's new Crawlmaster 1208i. A mobile jaw crusher with a 1200 x 800 mm feed opening it has a maximum theoretical capacity of 600 tonnes per hour. As with many mobile crushers and screens, power comes from a Deutz diesel engine – a turbocharged 256 kW, 12 litre V6 unit in this case.

The main change on the CM1208i, compared to the CM1208 is an update of its control unit. It now features a push-button automatic start, and a range of clever features to make operation more efficient. For example, the on-board system monitors how full the crusher chamber is. If it fills up, the feed is slowed down or stopped, and a beacon on top of the crusher flashes to tell the loader operator to stop filling the hopper.

There is a sensor at the tip of the conveyor, which stops the machine if the stockpile gets too high. The conveyor also has a belt weighing system built in, which automatically measures, verifies and logs production – an important feature for contractors that are paid by the tonne. This feature also allows the crusher owner to work out fuel consumption (and other running costs) per tonne. Sandvik says the main markets for electronically controlled mobile crushers are Spain and the UK, and it is also pushing the concept in the US.

While both machines are mobile the Chieftain 2100 Triple Deck is suitable for both ‘in quarry’ operation and the construction site, the Warrior H3S Screening Plant on the other hand is most definitely marketed at the high-end quarry operator.

Fixed plants will of course always have a place in the aggregate production industry, but what these case studies and interviews illustrate is the increasing role of mobile equipment. The advantages of flexibility and mobility, combined with the basic advantage that one set of mobile machines can be used at a variety of locations is a huge argument in favour of mobile machines.

The limiting factor is the production capacity of mobile equipment. Perhaps Mr Hedval's assertion that 500 tonnes per hour is the upper limit is a little on the low side, but there is clearly always going to be an upper limit. The higher a crusher's capacity, the larger and heavier it has to be, so logically its mobility will decrease.

Both approaches have their advantages, so if there is a lesson to be learned here it is that choosing the right system requires an open mind and a careful, case by case assessment of each situation.