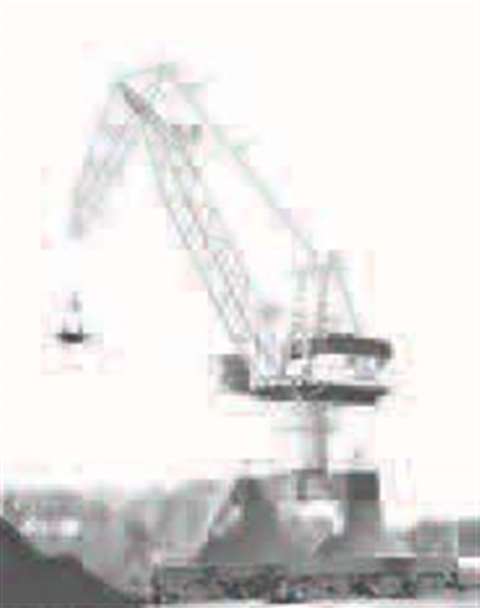 Kranbau Eberswalde is designing a new mobile gantry crane that it says will “allow railroad wagons and trucks unhindered access to quayside areas”. The self-contained AHC 1000 is an articulated luffing jib system that performs a horizontal load movement through its full radius range.

The load attachment is close to the tip of the jib, which shortens the swinging length of the load and does not require additional electronic swing stabilisation, the company says. In addition, the ropes are shorter than on traditional slewing cranes with an articulated luffing jib system, and the cost for a rope change during the operating period are smaller. When the crane is being used for handling work it can be connected to the port's 380-400 V power supply.

Two variations of the AHC 1000 will be available, one for sea and river ports and the other for stockyards. The first model is mounted on outriggers operated by hydraulic cylinders, which means the load is uniformly distributed over a large area. The cylinders can jack the crane and transfer its weight to the wheels in ‘movement’ position within two minutes, says the manufacturer.

The second model is a combined one, where rail bogies are fitted instead of the outriggers to allow operation on port rails. According to the manufacturer, both models offer a combination of high productivity, guaranteed safety and reliability in the same way as rail mounted level-luffing jib cranes. The travel gear system of the AHC 1000 is a similar design to that of Kranbau Eberswalde's Feeder Server system. Kranbau Eberswalde can supply the AHC 1000 as a completely mobile version or as a combined version that can use existing crane tracks.