Modulift and the Vikings 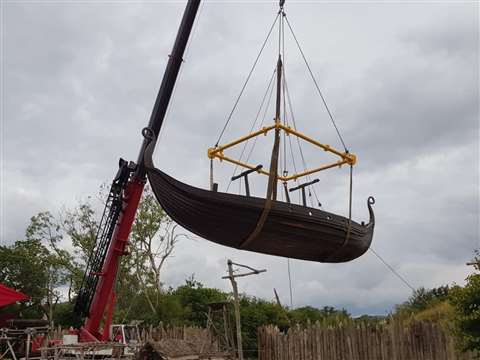 A spreader frame from Modulift was used to lift boats during the filming of a historical drama for television.

The History Channel’s Vikings was filmed at Ashford Studios in Wicklow, Ireland. It was made in collaboration with Irish National Marine Services.

The CMOD 24 frame with a maximum size of 5 x 4 metres was suspended from a 50 tonne capacity Grove GMK3050 owned by Irlequip which is also a Modulift distributor. The handmade boats weighed up to 5 tonnes.

The frame is recommended for loads with more than two lifting points and up to 30 tonnes can be lifted, depending on configuration. Each corner unit was rated at 7.5 tonnes. Most of the lifts were made with the frame set at 4 x 3 m but the larger boats required it at 5 x 4 m.

Damien Maher, responsible for capital equipment sales at Irlequip, said, “We were asked to provide a solution for lifting boats in a safe manner. We suggested the spreader frame as a practical means to not only lift but also to cradle the boats, thus, preventing any inward pressure or stress. Furthermore, the rig allowed the boats’ masts and sail rigging to protrude through the opening inside the ‘box’ created by the beams.”