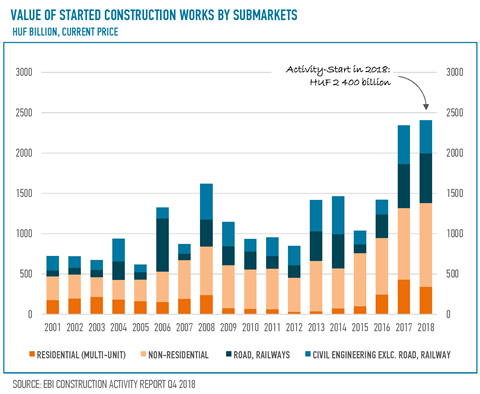 Momentum in the Hungarian construction industry slumped in the second half of 2018, despite it being a record year, a report from three of the country’s research companies has shown.

The EBI Construction Activity Report found that out of a total annual Activity Start figure of more than HUF2,400 billion (€7.63 billion), the second half of 2018 accounted for only HUF953 billion (€3.03 billion), though it said that it should be noted that the second half and the fourth quarter of each year were traditionally weaker.

EBI Construction Activity Report is produced by ibuild.info (project research and project database), ELTINGA Centre for Real Estate Research, and Buildecon (creation of indicators and development of algorithms for aggregation).

In non-residential construction, it said that Hungary saw the start of works of almost HUF1,400 billion (€4.45 billion) in 2018, which was an additional 4% rise over the record year of 2017.

The subsector was said to have performed well despite a decline of more than 20% in the Activity Start of housing construction in 2018 compared to 2017. The falloff was counterbalanced by the start of another record number of non-residential construction projects, which rose by 17% over the previous level.

The half-yearly Activity Start indicator of non-residential construction was said to have been rising steadily since 2017, and in the period from July to December 2018, works in the segment started on around HUF538 billion (€1.71 billion).

An unprecedented amount of civil engineering projects was said to have been launched in the first half of 2018. However, the second half recorded a lower Activity Start indicator than a year earlier. The 2018 value therefore fell short of the record set in 2017.

Civil engineering projects in the construction phase stood at HUF1,021 billion (€3.25 billion) compared to the HUF1,025 billion (€3.26 billion) a year earlier. The Activity Start indicator in the second half of 2018 was more modest than the previous year’s, but remained at a higher level than the figures for the period from 2014 to 2016. 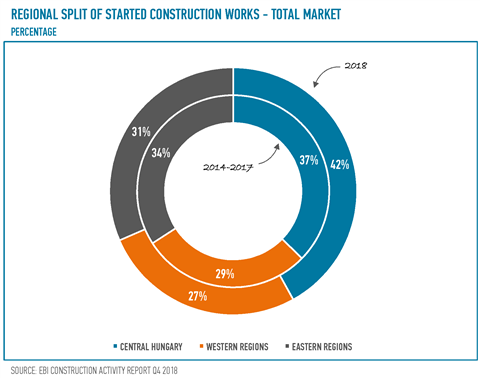 The period between July and December 2018 was moderate in comparison with several recent years. In the past six years, only the first half and second half of 2015 witnessed lower numbers. In the case of non-road and non-railway civil engineering, there was also a slight decrease from 2017 to 2018, but the value of Activity Start indicator was still higher than in previous years.