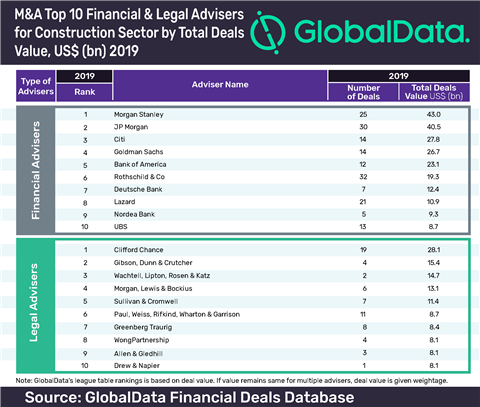 Morgan Stanley now heads up the latest mergers and acquisitions (M&A) league table of the top ten financial advisers in the construction sector based on deal value in 2019, according to data analytics company GlobalData.

Morgan Stanley left behind its counterparts JP Morgan, Citi and Goldman Sachs to lead the table with 25 deals worth US$43 billion.

“With only one megadeal (>US$10 billion) and less than ~50 deals crossing US$1 billion in 2019, the construction sector witnessed a major drop in overall deal value as compared with the same period last year,” says Ravi Tokala, financial deals analyst at GlobalData.

“Prologis’ acquisition of Liberty Property Trust for US$12.6 billion and CapitaLand’s purchase of Ascendas and Singbridge for US$8.10 billion were instrumental in deciding the top spot for both financial and legal advisers in the league table.”