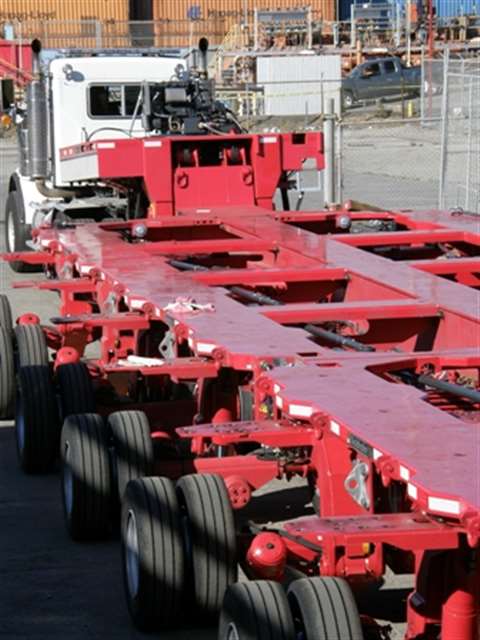 No matter the market covered, most manufacturers of low bed, heavy haul trailers were hit by the economic downturn. It's been three years since the '09 tumble though, and the market has slowly started to recover. Warm spots have ignited in oil and gas, and with America's transportation infrastructure needing more than a little TLC, manufacturers are developing solutions to move heavy loads across weight-restricted bridges and roads.

"Although things have improved greatly, our primary market - construction - is still bouncing back," says Greg Smith, vice president of sales and marketing for Talbert Manufacturing, a company that specializes in engineering and manufacturing a variety of heavy haul trailers and specialized transportation equipment.

Smith says Talbert has seen vitality in both the oil and agriculture fields while construction lags. "With the thriving agriculture economy, the need for equipment has increased significantly and Talbert has always been a strong in providing trailers well-suited for moving agriculture equipment from manufacturers to dealers and on to customers," he says. "Similarly, rising oil prices and the mining of new oil shale deposits in the mid-Atlantic and the Dakotas has increased the need for trailers hauling equipment to those areas."

Moving equipment to those areas, however, has become trickier over the years due to stalling highway and infrastructure bills (a new transportation bill is currently in the works. See the box story for a summary.) Roads and bridges across America are worsening, which has increased restrictions on crossing bridges and public roads with certain tonnage.

"The continued deterioration of infrastructure and failures of past years has increased the required review and limitations on bridge crossings," says Jeff Latture, Barnhart Crane & Rigging's senior vice president of sales and marketing. Barnhart specializes in providing solutions to complex lifting and transportation challenges. "The result [of deteriorating infrastructure] is the need for systems that can more efficiently distribute loadings on these structures. There is also an added demand by many DOTs to conduct specific bridge condition inspection, engineering analysis and post-haul inspections."

To combat these issues, Barnhart in conjunction with Goldhofer recently introduced the WesTrac Transportation System. "It's an example of a new technology that allows for load distribution, ease of mobilization and hopefully a familiarity in the DOT professionals to improve the processing of super load permits," says Latture.

The WesTrac was designed by Barnhart's engineers with German company Goldhofer. The WesTrac is a new class of dual-lane transporter with unique new features, the companies say.

"The envelope for transportation is an ever-growing one, which becomes the necessity to provide solutions for over-the-road transportation," says John Mickler, national logistics development manager for Barnhart. "The various governmental agencies are restricted to what can be allowed to travel over their maintained roads because of the infrastructure limitations, [so] Barnhart has developed tools and processes, like our new WesTrac system, to provide viable solutions for some of the issues."

WesTrac incorporates the features of a modular platform trailer, however the axle spacing and footprint are designed specifically to meet DOT requirements for roads and highways on the West Coast. The system is designed for efficient mobilization, higher road speeds and variable widths to achieve dual-lane loading. In some configurations, WesTrac can handle payloads over 600,000 pounds (272 tonnes).

"The addition of our Goldhofer WesTrac dual-lane transport system type THP/CA to Barnhart's cool tools inventory gives us the ability to transport over-dimensional and super heavy hauls," says Latture. "Barnhart's Long Beach, CA branch has a dedicated team that will provide planning and execution expertise with the new WesTrac System."

According to Latture, Barnhart also plans to introduce a new EasTrac System designed to meet DOT requirements on the East Coast.

Switching gears, Talbert sees activity increasing in the oil and gas markets. "As a custom trailer provider, Talbert is well-suited to cater to those special needs," Smith says. As a response to the ramping up of the oil industry in North America, Talbert recently enhanced its existing line of traditional low-bed trailers to cater specifically to the oil market. The company's heavy haul 60FG Field Lowbed trailer offers a capacity of up to 120 tons and was designed to target oil patch work.

"We are seeing considerable activity in this area and we expect this to be a significant area of growth moving forward," Smith says.

Talbert also has plans to release more product enhancements in 2013 that will specifically help dealers stock trailers with versatility. "The new changes in design - to be released in late 2012 - will greatly boost convenience and flexibility for our dealers," Smith says.

Though it's not directly a technology feature, one of the most critical aspects of any trailer is capacity. "When it comes to trailers, capacity is king, but buyers have to be aware when evaluating a trailer's hauling ability," Smith says. "To accurately evaluate and find the right trailer for their needs, operators must consider not just the capacity, but also the deck length for the capacity."

For Cometto, safety and size of modular trailers go hand in hand. The company is looking into new technologies that would apply to the design of special vehicles that would make road transportation even more secure than it is now. "We are also looking to develop systems to drive and control the vehicles and make handling operations easier, plus developing satellite systems that are able to connect operators with technical and service departments," says Stefano Tondelli, North American director of Cometto. "This will make use and maintenance of fleets easier and faster."

Tondelli says prospects for Cometto in 2012 are "good" and that the "number of requests is increasing due to various ongoing projects." However, the company did experience a setback due to the 25 percent increase duty introduced by U.S. Customs in 2011, which halted some interest from customers. There are a few bright spots, though.

"In addition to using modular systems for heavy transport, customers lately are orienting themselves to using customized transport systems, such as dual lane types, for transportation on roads and highways with bridges and viaducts," Tondelli says.

Cometto's latest market offering was the release of its 55-ton MSPE-evo self-propelled transporter with electronic steering.

One of the newest products on the market is another joint venture. Scheuerle and its sister company Nicolas have developed a new type of semi-trailer with hydraulically movable axles. It is known as the Superflex, and along with the standard version, other models such as "single-telescopic" and "double-telescopic" are also available.

As the word "flex" in the name Superflex indicates, the Scheuerle and Nicolas semi-trailer provides a high degree of flexibility making it possible for vehicles in the single-telescopic version to move the two front axle lines when telescoped between the gooseneck and rear suspension in 500 mm increments.

For vehicles with double-telescoping function, the axles can be moved towards the gooseneck as well as to the rear suspension. With this feature, the company says it is possible to adapt the vehicle to suit the respective position of the payload center of gravity, ensuring optimum utilization for each axle line.

The technical axle load of the Superflex varies depending on the type of tire used. With 245/70-R17.5 tires, the technical axle load is 12 metric tons, which increases to 14 metric tons axle load when using 285/70-R19.5 tires. The power supply for the vehicle hydraulics is supplied either via the tractor hydraulics or by means of an external PPU (Power Pack Unit). As an option, an electric PPU can also be integrated in the gooseneck.

The new Scheuerle and Nicolas low-bed semi-trailer with pendulum axles has an axle compensation of around 650 mm (245/70-R17.5 tyres). The company says this is essential to ensure careful handling of both frame and vehicle when operating on rough terrain. In addition, the steering angle of 60 degrees provides maximum maneuverability. In spite of the compact design, 1.5 meter axle line spacings can be realized which facilitates the approval procedure with regard to driving over bridges due to the better load distribution.

The Superflex is available in 3, 4, 5, 6, 7, and 8-axle versions. It is available with a range of vehicle variants: standard version (non-telescopic), single-telescopic and double-telescopic with 245 or 285 tires. The axle assembly telescopically movable in 500 mm increments and it has a two-stage platform width-extendable up to 3,200 mm. The extension beam closes flush with the platform when in a retracted position and it comes with a large number of foldable lashing rings with lashing capacity of 13.4 tons along with large slewing angle of up to 270 degrees. The power supply for the vehicle is also possible via the tractor hydraulics or an external PPU. Side panels of the gooseneck can be completely dismantled, and one-piece or two-piece rear loading ramps are available.

The new vehicle concept from Scheuerle and Nicolas was first unveiled at the Solutrans fair in Lyon (France). The Superflex was presented as an 8-axle vehicle with a single-telescopic version.

Talbert's most recent introduction to the market is its nitrogen-assisted dampening system, which hydraulically equalizes the load over all axles in all terrains. The Equalizer system oscillates around a central self-tracking pivot point to provide proportionate weight distribution in each axle grouping, regardless of varying road conditions, according to the manufacturer.

It is designed for operators to make easy and quick adjustments and to maintain those settings to safely maximize loads. By hydraulically damping axle movement and controlling load transfer, the system absorbs hauling and loading shocks to allow more suspension movement for reduced stress and a smoother ride.

Trail King's newest product is its Advantage Plus series of hydraulic detachable gooseneck (HDG) trailer. It features a new gooseneck design, as well as a long list of new standard equipment.

The detachable gooseneck system includes self-lifting hydraulic cylinders, non-ground bearing design, and V-shaped alignment guide. The updates include a new 5-position gooseneck door adjustment that allows for a full 8-inch range of king pin height settings, plus a notched setting control bar to take the guesswork out of setting the gooseneck doors in the desired position. A new arched design of the gooseneck provides ample truck frame clearance, even when set at the lowest king pin height, the company says.

Also new on the Advantage Plus HDG are the heavy-duty pullout front outriggers. Also, spring-loaded stainless steel latches can be turned and locked open, leaving both hands free to pull out or push in the outriggers and close-set outriggers at mid-deck to prevent planks from tipping up as the load rolls over them are now also standard.

While new products continue to come into the market, and some industries are doing better than others, the core market for some manufacturers like Talbert remains construction. "As construction continues to make a recovery, that market will pick up again," says Greg Smith, with the company.

In summary, the transportation reauthorization and reform provisions: