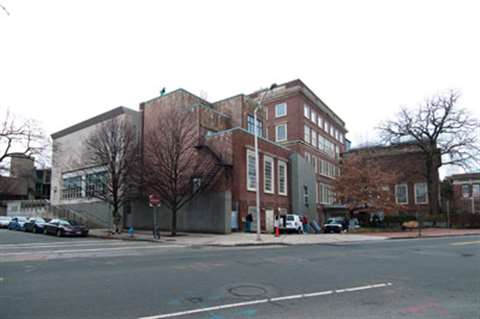 Harvard's Fogg Museum was built in 1927

The Fogg Museum, originally designed by Richard Morris Hunt, is Harvard's oldest museum. It was built in 1927 and is unique as it was built around a central courtyard influenced by a 16th century Italian church and is made up of several integral buildings and levels located within the heavily congested Harvard University Cambridge campus. It opened in 1895 on the present site of Canaday Hall, in Harvard Yard. In 1927, the museum moved to its present home at 32 Quincy Street- the building was designed by Coolidge, Shipley, Bulfinch and Abbott. Today the Fogg Museum is renowned for its holdings of western paintings, sculptures, decorative arts, photographs, prints and drawings from the Middle-Ages to present day.

The Fogg Museum is comprised of multiple structures: Werner Otto Hall, Naumberg Hall, and the original building constructed in 1927. The original Fogg Museum, which is the subject of the renovation, is constructed of steel, concrete, terra cotta and brick; its total size is 175,000 ft2. The complete renovation of the building is under the direction of Italian architect Renzo Piano and the project has an overall renovation budget of more than US$350 million (€260 million), funded by Harvard University and donations from numerous alumni, among them David Rockefeller, Class of 1936.

NASDI LLC's scope-of-work included the removal of all hazardous materials, selective demolition and bracing of the exterior walls of the original Fogg Museum. Also included was the complete structural demolition of the 1991 additions. This phase required extra care because of the close proximity to sidewalks and utilities during the removal of foundations.

NASDI also contracted with one of the leading engineers in the United States, LeMessuier, to design the bracing required to support the exterior walls and façades of the original historical Fogg Museum.

A steel fabricator and erector was contracted by NASDI, based on this design, to construct and erect the bracing to support the exterior walls and facades using the outmost care not to damage exterior walls, facades or historical window openings. This bracing was erected once NASDI systematically provided vertical and horizontal openings for the steel bracing.

The Fogg Museum is a unique structure and proved to be a challenge with respect to the removal of asbestos and other hazardous materials. The many large skylights that were removed were lowered, intact, due to the presence of asbestos in the caulking and glazing. This procedure was unique and challenging to NASDI and its abatement contractor, Yankee Environmental Services LLC, due to the size of the skylights and the height of the roof. Other challenges were asbestos pipe encased in concrete, asbestos paper sandwiched between two layers of concrete, asbestos insulation between thresholds and interior walls with sheetrock finishes over wood and then a layer of asbestos paper attached to wood and brick. Despite the many obstacles the asbestos abatement was completed on time and within budget without incident. Lead paint was also a concern on this project - each connection and cut for steel bracing entailed hundreds of locations that were spot abated by NASDI's trained workforce.

NASDI, LLC's health & safety record was one of the most important reasons why it was selected for this project. NASDI, LLC's commitment to safety is reflected in its EMR of 0.63 (2009-2010), 37 percent better than its industry average. Harvard University and SKANSKA USA highly emphasised the safety records of the contractors working on their projects. NASDI continuously monitored the air surrounding the work site and applied practices to mitigate dust with the use of wet methods. Noise was also a concern on this project. The Cambridge and the Harvard community surrounding the Fogg are noise sensitive neighborhoods. Maximum goals were set at 50 decibels within 15 m (50 ft) of the construction zone. This compares with normal noise levels inside a private home of 40 decibels, comparable to a quiet library. NASDI achieved these thresholds throughout the project.

Vibration was also a major concern. To avoid vibration NASDI, LLC sawcut and lowered to the ground multiple concrete slabs. The criteria for vibration at the Harvard Fogg Museum was similar to another project NASDI had recently completed at the Boston Museum of Fine Arts, located in Boston, Massachusetts, USA, where the same criteria was established and met one year prior.

Throughout the project NASDI held true to its history of managing a safe and healthy worksite.

NASDI's commitment to safety on the project was recognised by being awarded several "safety lunches" over the course of its participation in the project. NASDI worked closely with the local unions to keep its workers safe and up-to-date on all health and safety procedures and training. NASDI's director of safety, Michael Tibert, was located at the jobsite throughout the project to ensure all workers and subcontractors worked safely.

NASDI, throughout its more than three decades of service, has been a strong supporter and

practitioner of recycling. Harvard University, SKANSKA USA, and NASDl have achieved all

LEED requirements of 95% on this project and in some instances exceeded Harvard's own set goals. In 2010 and beyond, US demolishers have very few landfills remaining to them. As a result, it is imperative that all demolition contractors practice good recycling protocol on all projects large and small.