Germany-based international crane service provider Neeb used its Demag AC 500-8, manufactured by Terex Cranes, to lift girders over a motorway near Cologne, Germany, as part of the expansion of a bridge crossing the motorway.

According to Terex, restricted space was the first challenge for Neeb, which is why it opted to use its AC 500-8 – which handled all lifts in its base configuration compared to a smaller crane which would have had to be setup in its full configuration.

The crane arrived at the site accompanied by four trucks carrying its counterweight and accessories. Due to the lack of space, set up was awkward said Need. “As there were shaft construction structures and precast components from other construction companies there already, we had very little space to work with,” explained Dirk Salzer, project manager at Neeb. “That meant that we had to place the counterweight trucks on the opposite lane and then set up the crane from across the road and the guardrail.”

The crane was used to carry out eight main lifts, each hoisting a 37-metre-long, 51-tonne steel girder for the bridge. The restricted space again meant that, like the counterweight, the crane had to reach over the guardrail to unload the steel girders from the dolly-type trailers they had been transported on.

According to Terex, the lifts themselves required a high level of accuracy. Achieving this was made even more awkward as the bridge crosses the motorway at an angle of 80 degrees. In addition, the crane had to be repositioned once between the lifts without encroaching on the neighbouring Leverkusen bridge.

The lifts were completed successfully by two crane operators in 48-hour window one weekend. 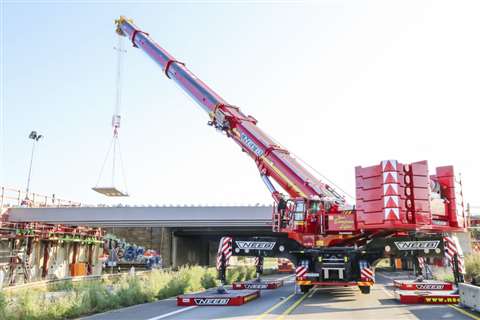