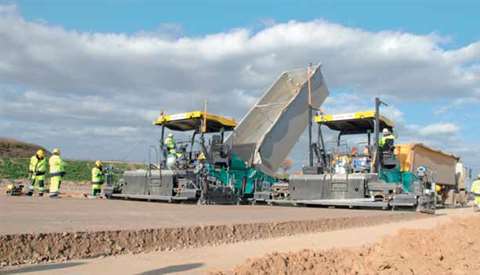 When Poland's new A1 motorway is opened to traffic, which is anticipated for 2008, the 10 Vogele pavers will have laid down around 1,6 million tons of asphalt.

Many european countries have faced tough budget constraints with regards to public investment in civil engineering during the past few years, according to the '2007 Construction Activity in Europe' report compiled by the European Construction Industry Federation (FIEC). However, the report added that growth in EU civil engineering has increased by +3% in 2006 and predicts that during 2007, a more modest growth rate of +1.6% is expected in the sector, although FIEC adds this could 'accelerate rapidly'.

There has been evidence to suggest that the level of activity in road infrastructure in Eastern Europe is increasing. For example, it was reported this year that Chinese banks plan to invest in highway construction in Ukraine with a long-term loan worth US $5 billion for a 20 to 25 year term. FIEC said in its report that all new member states are recording very high growth levels in civil engineering activity due to investment in infrastructure of all kinds, including transport in Bulgaria, Czech Republic and Romania. However, the fall in investment in Germany's road sector was more than compensated for in 2006 by works relating to other types of civil engineering, FIEC's report added.

Stephen Bullock, vice president of sales and marketing for Power Curbers, described the current European road-building climate as 'steady', attributing this to various factors including the current exchange rate with the US dollar. He added that the company continues to see strong interest from all over Western Europe, particularly in Ireland. He added that he attributed the increased levels of activity in Eastern Europe over the last few years to the influx of capital as these countries joined the EU.

“There appear to be major infrastructure projects and airport projects in these countries now with which we have become involved, for example, the company has supplied equipment for use in Poland and Russia,” Mr Bullock said.

More than 80 Wirtgen Group machines can be found working on Poland's A1 motorway – currently the largest road-building project in Europe. Wirtgen, Vögele and Hamm have supplied stabilisers, pavers and rollers to Skanska-NDI, the contractor building the 90-km long motorway – the first section of a north-south route through Poland, forming an integral part of the E 75 trans-European corridor. This links the Baltic seaports of Gdansk and Gdynia with Vienna and Southern Europe, passing via the Czech town of Brno and Slovakia's capital city, Bratislavia.

A total of five Wirtgen recyclers are being used to stabilise the subgrade and the stabilised layers are being compacted by 3412 HT VIO single-drum compactors, 3412 HTP padfoot compactors and pneumatic-tyred rollers from Hamm. Rollers supplied by Hamm can be found alongside the latest generation of Vögele pavers. Using high-compaction technology, two Vögele Super1900-2 models, equipped with AB 600 TP2 screeds, lay down pre-compacted frost blankets consisting of crushed stone. They are followed by Hamm rollers, which compact the granite rock.

Wirtgen Group equipment is also active in the placing of asphalt layers, which has already begun in some locations, according to a Wirtgen company spokesman. The Vögele Super 2100-2 with a standard screed type SB 250 TV is working with a Super 1900-2 with AB 600 TV and a 1803-1 wheeled paver with AB 500 TV.

The company spokesman said the tracked pavers take care of laying down the carriageway pavement, while the manoeuvrable wheeled paver works on the entrance and exit ramps. The final compaction is carried out by Hamm equipment: tandem rollers with oscillation and vibration are the roller types used most frequently in asphalt compaction, the spokesman added. (A full report on this project will be published in CE October 2007).

Some manufacturers are adapting their machines in response to the demands of their European customers. For example, Power Curbers has considered the environment in which its machines work and has thought about limited space – which is often a problem on road sites in Europe – when designing the latest models.

Mr Bullock said the most recent in the Power Curbers 5700 series, the 5700-C, is a significant machine for the European market.

“The machine can be adapted to pour off the right-hand side as well as the left. Some machines can do one or the other, but the 5700-C can do both,” he said.

“By being able to pour on the right as well as the left means that when a contractor is constructing perhaps a concrete barrier or a divider wall down the middle of a highway separating the on-coming lanes of traffic, this technique allows you to continually move along with the traffic regardless of whether you are pouring in the northbound or southbound lanes or east or westbound lanes.

“That flowing with traffic is important because as you are bringing in concrete trucks to feed the machine – well you can picture, that if you go against the traffic you create a real problem,” he said.

With its new standard swivel chute, the machine can pour in a single traffic lane, with the concrete truck lined up in front of the machine, instead of to the side.

He added, “The way we have configured this machine allows the auger conveyor to be pivoted at such an angle that it will receive concrete from the truck and feed the mold or the form all in a single lane so you don't have to interfere with adjacent lane traffic”.

The other advantage is that changing from left to right hand pouring takes just four to six hours, Mr Bullock said.

A spokesman for Gomaco said, “The GT-3400 is a three-track machine including All-Track Steering, high-speed track motors, and the patented simultaneous trim/pour feature.”

The spokesman added that the GT-3400 is the first curb and gutter machine to be operated by remote control and that changing molds is “quick and easy” with the Hook-and-Go mold mount system. He said that contractors can pave with either stringline or go stringless and the G22 controls interface with the stringless technology/3D control systems.

“One of the key things we do is design around reducing labour – reducing the number of people you need to run a job, therefore anytime we can automate is a plus for the contractor,” he said.

“Take our Power Curber 5700-C, for example, anytime the contractor goes from one application to another, typically they change the mold or the form that's attached to the machine – we have a hydraulic coupler on our machine which allows the operator to change the form in a matter of minutes whereas without that feature – the Quick Connect system - it could take a couple of men up to an hour.”

He added the innovation of the company's screw auger conveyor for moving concrete from the truck into the machine (as opposed to using a belt conveyor) resulted in a better finish, therefore requiring less manual labour in finishing the curb.

“The SF2204B HVW goes from its minimum paving width of 2,4 m to its maximum 6,10 m paving width in minutes, rather than hours,” a spokesman said.

The available conveyor and side kit attachment allows for the paving of barrier walls and curb and gutters. An optional control box for the attachment enables the contractor to perform mold, crown profile and final finish of the slab from either the left-or-right-hand side of the paver, the spokesman said.

“Contractors may also install the tandem mold in line of mainline paving operations,” he added.

At Bauma 2007, Bomag launched its new BF 600 paver available in wheeled and track versions with a working width of 4,7 m and 5 m, with gas or electric heating. The maximum working width can be expanded to 7,5 m with lateral extensions.

A spokesman for Bomag said, “User friendliness was top priority in the development of the BF 600. The viewing angle over work areas from the operator's platform was analysed and optimised using Bomag software. As a result, the engine hood, for example, has been lowered and sloped to provide a better view of truck loading. This means the driver can follow the loading process more easily.”

He added that control of the screed has also been simplified. “The screed control box is centrally mounted and is easy to reach at all times. This means the crew can control relief, locking and release of the screed during all operating stages,” he said.

The big movement and the future in the road-construction industry across Europe is towards 3-D machine control, Mr Bullock said.

“We are pursuing that and testing it because we think in the coming years it will create additional labour saving and will eliminate the need for setting string line.”

He said that GPS was currently too expensive and suitable only for larger jobsites but when the technology became more affordable and practical for Power Curbers' machines it would replace the need on some jobsites for using sting line on some models.

Mr Bullock added that there are other concerns with integrating GPS into the machines. He said by eliminating the string line system the contractor looses an important visual aid and checking system and training operators with the 3D system was another sticking-point, as the technology is significantly more complicated than using traditional methods.

Considering the future FIEC said in its report that the great infrastructure needs of the new member states and the major EU financial contribution under the Cohesion Policy gave grounds for anticipating very positive prospects for civil engineering in 2007.

“However, this will also depend on the capacity of the new member states to translate these contributions into actual investments, in respect of which initial tangible signs should be visible as from 2008-2009,” the report from FIEC added.