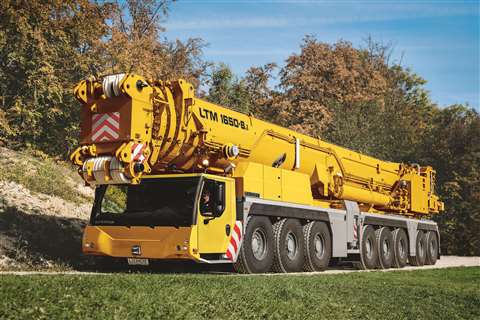 The newest star of Liebherr’s wheeled mobile crane range is the LTM 1650-8.1. It is successor to the venerable LTM 1500-8.1. Almost 600 examples of that model were built, making it the best-selling large crane of all time, Liebherr said. A lot for the new model to live up to then.

The new crane has a nominal capacity of 700 tonnes. For the boom there are 54 and 80 metre options. It is designed to deliver maximum performance and maximise what is possible on an an eight axle carrier, Liebherr said. Lattice boom extensions include fixed jibs from 6 to 55 m and the luffing jib options range from 21 to 91 m. The fixed and luffing jibs can be fitted to the 54 and 80 m booms. Maximum hook height is 153 m and 110 m is the longest radius.

Capacities are higher on the new crane than the outgoing 500 tonne model by between 15 and 50 per cent, according to whether or not the optional boom guying system is fitted, Liebherr said. The manufacturer’s VarioBase system of optimising capacity according to the way the outriggers are set is included as standard.

With the 54 m boom and the front outriggers onboard it travels at 12 tonnes per axle. To minimise set-up time the rear outriggers are installed in one lift and use quick-release couplings. Configurations with loadings below 8 tonnes per axle are possible, the company said. At the other end of the scale in, for example, the UK where 16.5 tonnes an axle is permitted, the crane will travel with the 80 m boom, all outriggers and the boom guying system.

Power is from a carrier-mounted 505 kW Liebherr V8 diesel with a maximum torque rating of 3,160 Nm. It drives a 12 speed ZF TraXon Torque gearbox with torque converter clutch for smoothly pulling away from stationary and low speed manoeuvring. A new feature is EcoDrive which is a driving mode to save fuel and reduce noise when travelling. Also fitted is Hillstart Aid to make starting on gradients easier. An intarder on the gearbox acts as a retarder brake. There is also a Telma eddy current brake as standard.

For the crane side, a mechanical drive transmits power from the engine in the carrier via shafts and gearboxes through the centre of the slewing ring into the upper structure where it powers the hydraulic pumps for crane operation. It is similar to the other most recently introduced 230, 300 and 450 tonne tonne capacity models. For crane operation the engine has ECOmode to help minimise fuel consumption and reduce noise.