Vertical and horizontal heavy transport company Aertssen Machinery Services (AMS) opened its first purpose-built complex, comprising office space, workshops and warehouses, in Abu Dhabi, United Arab Emirates (UAE) on 7 March 2019. The company has had a presence in the Middle East for the last ten years but, until now, has leased its premises. The new building will be the base for AMS’s crane department in the UAE. 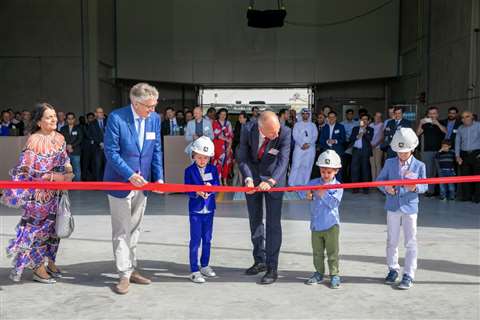 “Over the last year-and-a-half we have been working hard to get this building finished and we are very happy to enter the new building with the entire team,” said Tony Nuyts, general manager of AMS.

Over 250 customers, suppliers and employees attended the opening ceremony of the new premises. The CEO of parent company Aertssen Group, Greg Aertssen, said, “We chose to cherish our Flemish roots and had the façade built with identical bricks as at the headquarters in Stabroek. We are convinced that the Flemish know-how with a focus on quality and safety in combination with local expertise distinguishes AMS from the competition. We are here to stay.”