When Australia’s Liberty Industrial was set to remove structures from Hamilton Wharves on the Brisbane River, an early site reassessment proved vital.

The project involved the removal of wharf structures including of 18,000 sq m (193,750 sq ft) of concrete deck and substructure including timber bearers, joist and concrete head stocks, edge beams and the removal of over 1,900 piles.

Liberty Industrial won both Stages 1 and 2 of the project, delivering both stages concurrently to satisfy the client’s tight scheduling requirements.

The project raised several challenges that needed innovative thinking to solve. At the time of tender there was a consensus that the wharf could support excavator loads to allow the efficient removal of the substructure timbers. The client asked Liberty to carry out a more detailed structural assessment to confirm this understanding was correct. However, this assessment showed the wharf to be in such a state of disrepair that the largest excavator able to work from the deck was only 8 t. 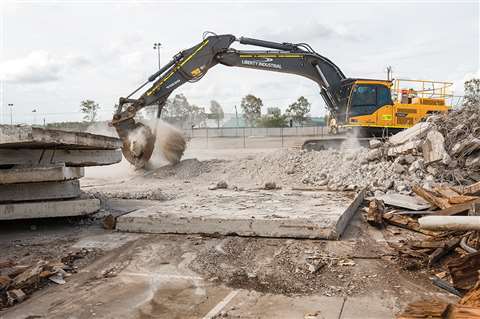 At least 95% of the materials removed will be recycled

This called for a complete rethink of the method while still meeting the client’s key requirement to reach project completion within the same time frame. Liberty developed a method using large crawler cranes that could reach to the full length of the wharf while sitting behind the revetment wall and on the land side.

There were detailed lift studies so that concrete panels and header beams could be cut and lifted in large sections to reduce preparation and rigging times. Chemset bolts were set into the slabs to enable lifting and lifts in excess of 30 t were achieved. Complex rigging of the substructure timber also took place so large sections of the structure could be removed in single lifts.

Some sections of the wharf were derelict, so there was a serious risk of collapse as the works progressed. This required the slab cutting to be done in a methodical and staged manner, maintaining the entire wharf stability throughout the works.

A detailed cut plan and strategy was developed with some sections of wharf substructure being presecured to the underside of the slabs to prevent them from collapsing into the water during lifts. Due to the number of commercial and recreational boat movements nearby the site, this was a critical aspect of the project.

The piles varied from timber with concrete sleeves to hollow and concrete filled steel piles, some of which exceed 1 m (3 ft 3 in) in diameter. The piles had to be cut a metre below the existing seabed depth rather than completely removed, to ensure the ongoing stability of the existing seawall and river bed. Three full time dive crews dedicated to specific techniques implemented a range of underwater cutting techniques.

These included underwater dredging to expose the piles below the sea bed, specialist riggers to safely sling the concrete protective sleeves which existed on the majority of the piles, underwater hydraulic chain saw to cut the timber piles and underwater diamond wire cutting equipment to cut steel and concrete piles.

The original methodology allowed for the piles to be removed via a barge mounted crane with vibrating head attachment. The Brisbane River, where the works took place, has strong tidal flows and is also subject to very significant flooding. In this section of the river commercial ships including large cruise liners frequently pass and turn adjacent to the area.

Shipping access was a key consideration and given that almost 2,000 piles were being removed from a fairly steep bank, geotechnical stability was also a factor. The client made a geotechnical assessment and decided that removing the piles would cause unnecessary risk to the stability of the river so an alternative method needed to be developed.

It was decided that all piles needed to be cut 1 m below the existing river bed to keep the bank stable and allow for shipping navigation to continue close to the area in the future. Again the client said the original completion date must be maintained.

Liberty Industrial opened talks with a specialist dive contractor to take on these works. Approximately 150 of the 1,900 piles were steel cased piles filled with reinforced concrete. The cutting of these piles, around 8 m (26 ft) below the water, was a critical consideration to ensure works could be finished on time.

These works needed to progress ahead of the slab deck and superstructure removal for safety reasons, so around 30 diamond wire cables were acquired. This enabled the dive crew to move ahead of the works and leave the cables in situ around the piles on the river bed, still joined to the superstructure.

After the removal of the superstructure, the cables could be recovered and process repeated.

Due to requirements of the programme, Liberty mobilised the three separate dive crews so works could progress efficiently. During site works it discovered two 1,100 mm (43 in) diameter steel piles previously not identified at tender stage.

The underwater diamond wire saw only had a throat opening of 900 mm (35 in) so a new method of removal needed to be developed. Removal of the piles took place in two sections because of their weight and location on the outer edge of the structure. 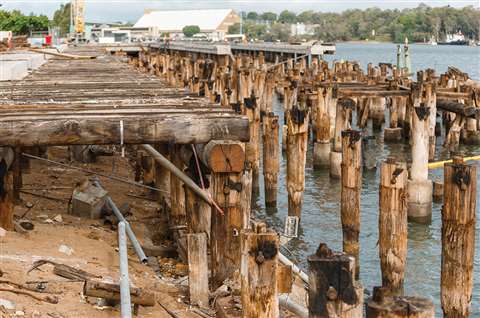 The outer steel casing was originally cut with underwater torches to expose the reinforced concrete. With the concrete then hammered back, underwater, and the reinforcement removed, the diameter of the pile was reduced and the diamond wire saw could be deployed.

When dive works began, the crews identified large numbers of broken piles and other debris scattered along the river bed. None of these materials had been identified in the pre-demolition hydrographic survey.

Liberty acquired a large number of additional lifting slings that the divers could move ahead and sling this debris efficiently, rather than waiting for the crane to slew back into position.

Once a substantial quantity of debris had been rigged, the crane and divers moved swiftly along the work area lifting the debris in a way that ensured the programme remained on track.

The dilapidated nature of the substructure meant a specialist timber recycler needed to be on site full time to assess every piece of material.

All suitable timber is being recycled for reuse as high quality structural and architectural hard wood, with select pieces to be used in future landscaping and structural architectural features across the development.

At least 95% of materials will be recycled including all the steel beams and reinforcing, the full 11,500 t of concrete wharf deck and header beams, and more than 95% of timber.

Liberty also completed the first 22,500 man hours of work on the project without a single safety or environmental incident.

*Originally published in the January-February 2017 issue of D&Ri. You can register to receive the magazine on a regular basis at www.khl.com/subscriptions 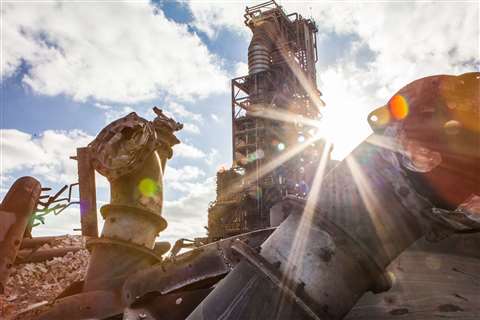