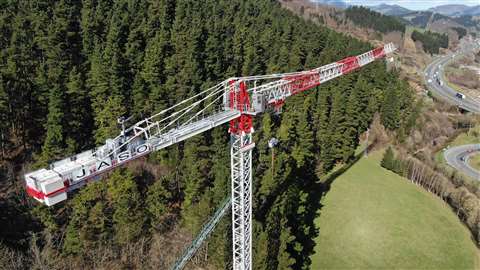 It follows the same low top design principle as the larger model and is designed for loads requiring a capacity of between 18 and 21 tonnes at 40 metres with a maximum boom length around 60 metres. With a shorter jib it has the capacity for PPVC (pre-fabricated pre-finished volumetric construction) where typically module loads of 35 to 40 tonnes are needed.

Capacity with double rope reeving is 48 tonnes or 24 tonnes with single reeving. Capacity at the end of an 80 metre jib is 5.1 tonnes. The standard hoist motor is 110 kW while the optional 132 kW unit gives a maximum line speed of 150 m/min. Lebus grooving on the hoist winch was specially designed for Jaso. It will allow enough rope for a 455 metre hook height with single reeving or 227 metres double-reeved. 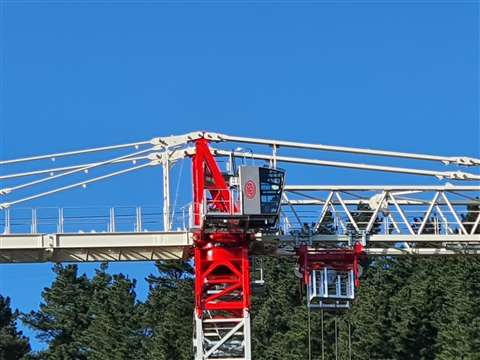 Close up of the low top tower head design on the new Jaso J800.48

During erection the section with the pendant attached is lifted, in one piece with the first two sections, to form the short 23 metre boom. Extension is then possible in 2.5 metre increments. Also short is the swing radius, the minimum of which is 18.6 metres, achieved using one of four modular counter jib configurations.

Transport is in standard containers and on standard trucks so there is no need for special open top containers or flatbed trailers. For added safety a secondary clamp-type brake is available on hoist and trolley.

The manufacturer said its low top design is much lower than a true hammerhead. It gives the same benefits as any flat top design in this same range, Jaso explained, “When you compare like with like there is actually no difference in the clearance heights of flat tops and this Jaso low top, because flat top designs need deeper jibs to compensate for the pendant height, to give the boom its strength. So, when oversailing, its performance is more favourable because of less deflection, thanks to the extremely short but strong pendant.” 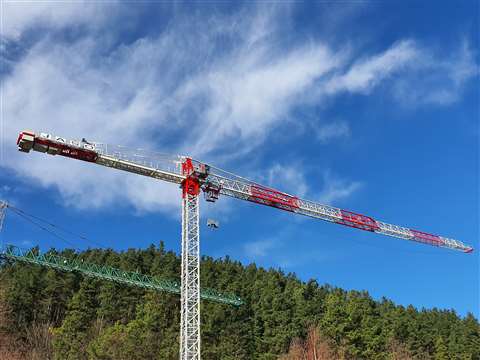