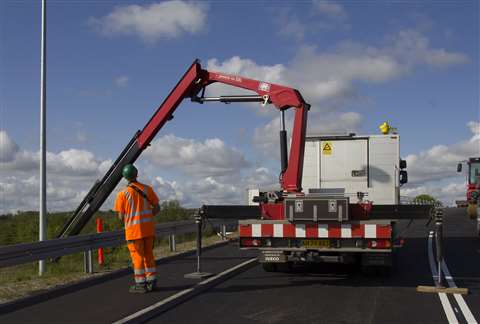 Denmark-based loader crane manufacturer HMF has released a new crane series in the 6 to 9 tonnes range.

A common characteristic of all the cranes in this series, said the company, is the unrivalled power to weight ratio, which provides maximum use of the vehicle payload. At the same time, the cranes have a particularly high lifting capacity.

The cranes have the HMF single Power Plus link arm system and a genuine over bending of 15 degrees, which combined with the main boom can be raised to 90 degrees.

Although all the cranes in this series have a reach exceeding 11 metres, they still have a very compact design. The minimum space requirements are down to 66 cm including two extra valves routed to the end of the extensions with widths of 2.1 m and 2.2 m, respectively. The very compact dimensions, compared to the very low tare weight, make it easy to fit the cranes onto even small vehicles, the company said.

The cranes are designed with a double cross beam (two beams parallel to each other on the base), which allows for a large and efficient stabiliser spread on the crane. They are available with stabiliser spreads of 3.4 m, 4.4 m or 5.2 m.

The cranes can be equipped with many types of extra valves to meet most requirements for hydraulic accessory application such as rotator, clamshell bucket etc.