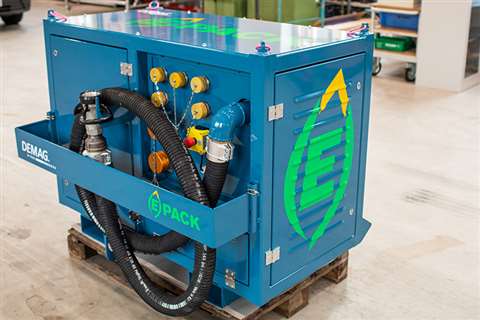 Terex has released a new E-Pack to go with its Demag AC 45 City crane. The company said the E-Pack add-on enables the AC 45 to work with zero emissions and reduces the overall noise level of the crane.

The optional E-Pack powers the crane’s electrical and hydraulic systems and, according to Terex, can be transported with the crane rather than separately. Once onsite, the unit can be connected to a common 400 V / 63 A electrical power supply.

According to the manufacturer, the environmentally friendly unit can also run the air conditioning system and charge the vehicle’s battery. Complete with corresponding electrical and hydraulic connections, the company said the E-Pack can be fitted to new crane orders and retrofitted to cranes that have already been delivered.

While the crane’s lifting speed and the number of engine revolutions per minute are both lower when using the E-Pack compared to using the crane’s diesel engine, Terex said the zero-emission output and the quieter operation it enables make the AC 45 City crane even better suited for use in urban and residential areas.