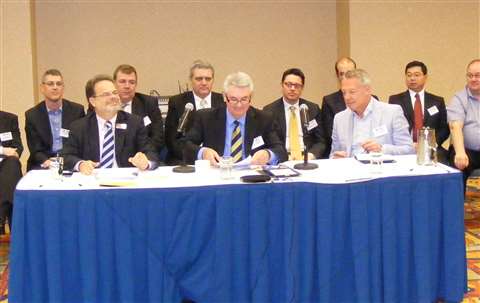 Steve Couling (centre) takes over the IPAF presidency from Wayne Lawson (right) at the IPAF Annual General Meeting in March. Tim Whiteman sits on the left

Steve Couling, Time-Versalift managing director, has been elected the new president of IPAF.

Mr Couling took over the reins from Wayne Lawson at the International Powered Access Federation’s (IPAF) Annual General Meeting, held during the IPAF Summit in Miami, US, on 26 March. He will serve a two-year term.

It was also announced at the meeting that Andy Studdert, chairman and chief executive officer of US-based NES Rentals, had been elected deputy president.

In his inaugural speach as president, Mr Couling said IPAF had come a long way since it started 30 years ago, but must now reiterate its not-for-profit status. “We must ensure that our industry is safe,” he added.

The association now has 1002 members and has supplied 462000 PAL Cards (Powered Access Licence) worldwide. “Over the last 30 years there have been some significant changes and IPAF, as an organisation, has needed to be flexible and adapt with the times. IPAF has also experienced rapid growth, and has, at times, felt growing pains,” added Mr Couling.

He outlined three goals for his two-year term as IPAF president: specialist training for the vehicle-mounted sector, online training programmes and the creation of more IPAF country councils to enable regional forums for discussion and a local focus on issues important to those regions.
“The vehicle-mounted platform sector has further to go than most,” he noted. “There is still a far too relaxed approach to specialist training needs in some regions. This is an area that I will be personally trying to address during my term as president.”
With IPAF’s recent launch of an eLearning module as part of the AWPT operator training programme in the US and Canada, Mr Couling said this was an exciting arena that IPAF needs to be in from the outset.

Mr Couling added that with regions as diverse as Scandinavia, the Middle East and South America experiencing strong growth, IPAF must provide the right support to enable them to prosper. One of the ways, he said, was through eLearning, which would allow operators in the remotest regions to receive training.

He ended by thanking IPAF volunteers, staff and members, including IPAF’s CEO Tim Whiteman, for their loyalty and commitment over the years.

At the meeting, two new members were elected to the IPAF board of directors: Brad Boehler, president of Skyjack, and Nick Selley, group business development director of AFI-Uplift.