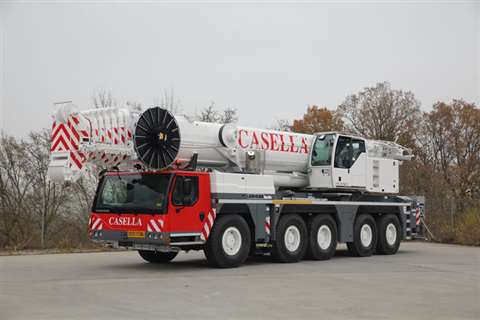 The five-axle model has a 200 tonne capacity, a 72 metre boom and 72 tonnes of counterweight. It is also fitted with the new Liebherr Variable Supporting Base Technology.

Corrado Villa and Davide Villa, co-owners of Casella Autogrù Srl, said “In 2008 we bought a Liebherr LTM 1100-5.2, in 2011 a Liebherr LTM 1250-6.2 and now, in order to renew and complete our fleet - composed of 15 mobile cranes, many of which are Liebherr branded - we had to replace the oldest LTM 1160/2. This is the reason why our choice fell on a LTM 1200-5.1. The crane's performance is terrific as well as the level of technologies inside it. All that gives us the opportunity to operate with greater flexibility”.

The first task for the new LTM 1200-5.1 was in Piacenza, where it helped build a drilling rig.