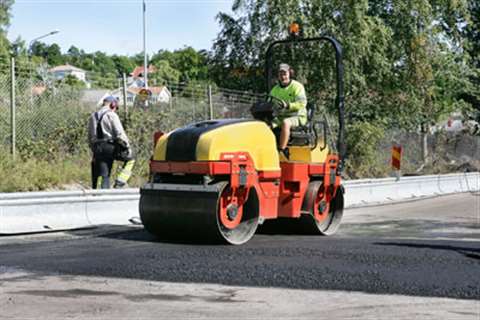 Dynapac took the wraps off six new compact tandem rollers for the rental market at its October 2010 launch event in Bremen.

The six-model range comprises four advanced SD models with electronic controls, while the two F machines come with electric controls and gas heated screeds. Thomas Hörnfeldt, Dynapac's vice president for capital equipment described the F models as "Rugged" machines, and the company expects the main interest in these to come from developing markets.

Talking about the development of the new range as a whole, he added, "We have been talking to a lot of contractors to ask what the most important thing is, and the all said it's the cost of paving, along with reliability and servicing."

A common feature across both the F and SD machines to support this is the redesigned hopper, which has rounded-off internal corners to ensure asphalt does not stick. Also new on both paver types is a high capacity conveyor capable of moving 11000 tonnes per hour of material to the screed, and the whole hopper assembly is lower than on previous models to allow it to be fed by different sized trucks.

An interesting new feature is Dynapac's patented 'Safe Impact System' - a bumper/roller mounted on the front of the hopper via two hydraulic cylinders, which acts as a chock absorber when trucks are backing up to the paver to tip in asphalt.

The main divergence between the F and SD machines is in the on-board technology. A key part of this is the engine. Dynapac has used Cummins units throughout, but whereas the SD machines will be fitted with Stage IIIB/Interim Tier 4 units for the European and US markets, the F series will take Tier 3 or lower units for developing countries.

There is also a difference in size and capacities, with the largest of the four SD units, the SD 2550 offering a 14 m pave width, while the F series does not get this big, with the F2500 offering a 9 m width.

The SD machines are bristling with new features from Dynapac, including a system to improve operator visibility, whereby the entire operator's station - seats, console, canopy and all - can slide up to 500 mm to the left or right at the push of a button. The two seat and console positions can also be adjusted.

The console features a 165 mm colour display, and the other controls can be illuminated for night work. The operator can access eight of the 11 different menus on the display to view different aspects of the paver's performance, and there are another three that are password protected for service engineers' use.

In terms of control systems, Dynapac has introduced its new Eco-Mode system, which allows the operator to steplessly match revs to the load being placed on the engine. The optional Vario Speed control takes care of this automatically.

On the SD's screed itself, Dynapac has integrated a levelling system from mobile automation specialist Moba, and there is also a remote control available. Other innovations include on-board systems that automatically read what type of sensors are being used on the screed, and Dynapac has also shortened the heat-up time for its electric screeds. Both the gas heated and electric versions can now cope with road designs featuring a crown (camber) from -2.5% to +4.5%.

Another area Dynapac is keen to highlight is the tracks, which have been specifically designed for a paving applications. They feature 320 mm wide long-life rubber track pads, and more rollers than would normally be found on say and excavator track, to provide a smoother ride.

Dynapac has also completed its range of compact wheeled milling machines, with the addition of the 600 mm cutting width PL600T and 1 m PL1000T.

A key feature of the entire PT range is manoeuvrability. Indeed, even the PL1000T has a minimum cut radius of just 230 mm. "You can even cut around a manhole cover with a 1 m machine. That is unique in this segment," said Jürgen Seemann, marketing manager for Dynapac's planer range.

Another feature is the single-sided drum drive assembly, which makes changing milling drums a 30 to 45 minute job according to Mr Seemann. "One of our key targets was to make changing the drums as quick and easy as possible, because these planers are not just used on one job per day," he said.

Another interesting innovation is the parallelogram arrangement of the front axle, which means the two wheels can run at different levels - one on the road and one a curb for example - while keeping the drum in full contact with the surface being removed. This reduces wear on the tyre shoulders and increases traction.

Dynapac also has a patent pending for the holder around the front of the cutter drum, which helps stop material accumulating or being left behind instead of fed into the conveyor.

The machines are designed for small-scale roadwork, such as patching jobs and other types of maintenance. Wheeled, rather than tracked machines are favoured for this class of machine and application, because they are more manoeuvrable on site, and easier to transport between jobs.

Dynapac has taken the wraps off three new tandem asphalt rollers, built with the requirements of the rental market in mind. The CC1100, CC1200 and CC1300 cover the 2.4 to 3.9 tonne weight class as and are available either with two steel drums, or in a combi configuration, with one drum and one rubber tyred roller.

According to Bengt Merkel, Dynapac's marketing manager for rollers, the units are likely to be used on small scale paving jobs like driveways and small roads, repair work, parking lots and sidewalks. "Our ambition is to offer the most reliable and modern compact tandem rollers in the market, giving our customers the lowest total operational cost. Still very reliable, our new models bring more ergonomics, modern design, and components, making these models exceed our customers' expectations," he said.

"These are built for tough situations because they will be used by different people in different situations. They are also easy to transport," added Mr Merkel.

Safety is an area where Dynapac has put some thought in, and one of the results of this is a series of prominent grab handles on the central instrument console and next to the driver's seat.

"We did some research in Sweden and the most common injury occurs when an operator twists his foot or ankle getting on and off the roller," said Mr Merkel.

Other safety features include rollover protective structure (ROPS) frame as standard, which is easy to fold down for transportation.

Service has also been given careful thought, as is demonstrated by the huge, wide opening engine hood. As Mr Merkel said, "When you open it, the service engineer can see everything on a platter."

Other features that will please engineers, is the grouping of all the key service points together, extended intervals on some of the filter and fluid changes and the use of long-lasting corrosion proof tanks for fluids. Dynapac has also adopted a 'kit' approach to service packs, with 50 hour, 500 hour and 1000-hour packages available, which should make ordering parts and carrying out services a simpler and quicker task.

The rollers come with a one year warranty as standard, and this can be extended by a further one or two years. Dynapac also offers full maintenance contracts on its rollers.

Finally, and in part thanks to the use of water-cooled Kubota diesel engines, the rollers are quieter than their predecessors. "We have brought down the noise level to an absolute minimum because we know these machines are used in cities and on overnight projects," said Mr Merkel.