New 90 and 100 tonne capacity Liebherr rough terrain cranes have been put through their paces by Dubai-based Al Faris.

In January the crane rental and specialized transport company ordered 25 new cranes from Liebherr. The order included four of the 90 tonne LRT 1090-2.1 and eight of the 100 tonne LRT 1100-2.1 models.

The new cranes are pictured at the company’s new head office in Dubai, which is an expanded 177,000 square metre facility built on the site of its previous headquarters. The location houses office buildings and an extensive yard with a 28-bay workshop and paint and fabrication buildings. The location opened in the second half of 2017 and is the base for all of the company’s Dubai crane fleet. The scale of the operation is huge, with approximately 900 tonnes of crane counterweight moved in a typical day. 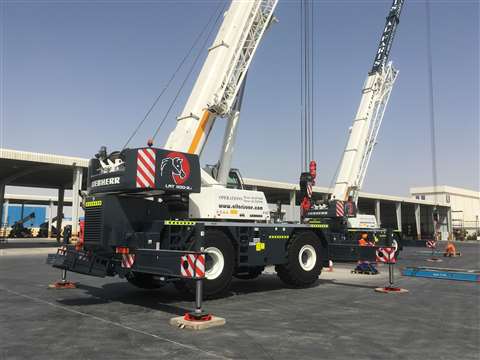 How will hydrogen change construction equipment rental?
Clean and odourless, hydrogen promises to lift fuel supply out of the “dark ages” of carbon, although its widespread uptake is a way off
Loading...
Previous Next ×