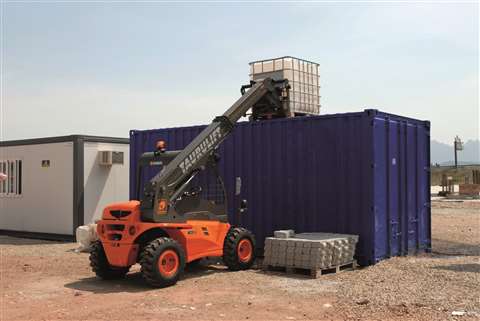 A new style for Ausa dumpers will be unveiled at Intermat – a totally redesigned concept that it said would set the line for the future of the company.

Among its features are the equipping of telematics, a Start & Stop system, the Full Visibility System, an improvement in several safety parts, and its different driving modes for a more efficient fuel consumption.

Introduced in 2017, the D450AHG will be sold from April this year. Ausa is increasing its capacity range with this new 4.5 tonne dumper, which it said fitted a need in the construction sector.

At Intermat, it will be equipped with the Full Visibility System – a safety system that provides two cameras with infrared night-vision, eight proximity sensors and a TFT screen in the driver’s position.

Other Ausa machines on show at Intermat will include the D 100 AHA, the company’s most compact dumper; the Taurulift T144H Plus telehandler, which, thanks to its reduced weight of 2,400kg and compactness at 1,405mm, can be transported on a conventional light trailer; and the Ausa T235H, which is the biggest telehandler from the company.