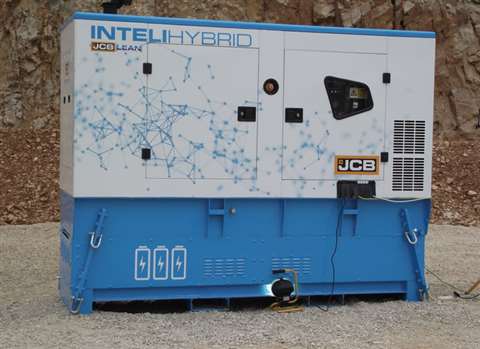 JCB has increased its range of Inteli-Hybrid generators.

Hybrids have been around for a few years in the generator sector, with traditional diesel-powered units being supplemented by rechargeable battery units to provide power in certain conditions. It is a concept which seems to gaining traction – perhaps more so than in other types of construction equipment. Indeed, not only are generator makers producing hybrid models, there is a further industry emerging of manufacturers making hybrid modules to complement traditional generators.

One such company is UK-based Firefly. Sales director Huw Bement explained the sector was ripe for a hybrid approach because generators tend to be selected on the basis of the maximum possible load, and are therefore too big and wasteful. “A generator tends to be running inefficiently anyway, because it is much bigger than required. Even if it is appropriately sized, there are going to be times in the day when it is inefficient, because there is very low load,” he said.

Mr Bement continued, “Fuel saving has two benefits. There is a commercial saving to be made – you use less fuel and you save money. In the vast majority of cases we’re able to demonstrate overall savings in a setup - either factoring in the cost of purchasing or a cost of renting our units - there is an overall saving to the end user.

“Second, even on a cost neutral basis – so say the cost was the same as with a conventional solution – the customer would see a CO2 saving. That is interesting to people looking to demonstrate their sustainability savings.”

Those lighter loads on the generator are likely to be at night, when the equipment requiring power on a typical construction site might only be floodlights, CCTV monitoring and maybe facilities for a night watchman. That is another area when hybrid generators can come into their own, because those needs could be met by the battery alone, saving the noise and emissions of a diesel engine.

“It offers a solution to being a good neighbour,” said Mr Bement.
He added that maintenance was another area where there was an advantage. “You might be running 12 hours through the day on a generator, and 12 hours overnight on our system. That means you are halving the run time of the generator, which is a saving in maintenance and servicing. In the event of a breakdown of the generator, there is another source of power on site, so critical systems can keep running, while the maintenance is carried out,” he said.

One of the company’s latest products is the Arcturus i-HPG range. This is an all-in-one unit including the diesel engine as well as hybrid storage.

The Arcturus i-HPG One goes up to 100 kVA, while the Arcturus i-HPG Two covers 120 to 350 kVA. Standard features include remote communications software and large service doors for easy access and maintenance, and the ISO container has lifting eyes and forklift pockets for ease of transportation.

Similarly, JCB Power Products has increased its range of Inteli-Hybrid generators to include six models. They now offer three units covering the 65 kVA to 115 kVA range, with each available in two engine configurations, based on the emissions laws of the country where they are to be sold.

They combine a traditional JCB QS diesel-driven generator with a sealed lead-acid battery bank and an intelligent Power Management control system. A further refinement is the automatic stop-start system, which JCB says can result in fuel savings of up to 60%.

JCB’s Livelink telematics system is standard, allowing fleet managers access to monitor equipment in real time remotely from the office. This alerts low fuel situations, helps in the scheduling of service work and also acts as a tracking unit, warning customers of unplanned movement of machinery
and acting as a theft deterrent.

Himoinsa also has two new hybrid generators in its range, the variable speed HPS 1500DCV and HPS 3000DCV, which it says can offer 40% fuel savings compared to a standard genset and 20% when compared with other fixed speed, hybrid gensets currently available on the market.

The company says this is due to the CEM7V control unit it has developed which monitors engine revs, the electronic voltage regulator (AVR) of the alternator, for direct battery charging, as well as independently monitoring each battery, its charge status and temperature.

In the traditional diesel-only generator sector Chicago Pneumatic has unveiled its new range of mobile units for the European market, the CPDG range. Five models are available in 9, 14, 20, 30 and 40 kVA ratings.

“Our new range of CPDG generators are built tough, but offer maximum versatility and a wide range of features to fully meet the mobile power requirements of the general construction and rental industry,” said Angel Nieto, product marketing manager, Chicago Pneumatic.“Easy to use controls and fast maintenance accessibility mean the generators are never idle for long, and a high-capacity fuel tank provides for extended run-times between refuelling to ensure maximum productivity from both the generator and those working on site.”

Caterpillar has launched the XQ375, which the company’s first mobile diesel generator set to meet Tier 4 Final emissions standards. The unit is rated for prime operation between 290 and 320 kW and is powered by a Cat C13 engine.

It is equipped with the new EMCP 4.4 control panel, which allows for automatic configuration of key performance parameters when voltage changes are required. Caterpillar says this also works with other onboard systems to sense changes in load and adjust the parameters for optimum performance.

Meanwhile, Europower has increased its generator range to offer 10 to 250 kVA models for Europe. Unlike the US, generators in Europe are governed by different engine emission laws to mobile equipment, so these machines feature Stage IIIA engines, the current requirement, Stage II-engined versions are available for lesser regulated markets.

The 10 kVA model features a Kubota engine working at 3,000 rpm, as opposed to 1,500 rpm for the engines on the larger models. Europower says this makes for more power from a compact unit, and adds that the engine can be expected to last for at least 7,500 hours of operation.

The latest additions to Doosan’s European range are the Stage IIIA 40 kVA prime power G40-IIIA and 60 kVA G60-IIIA, which the company says have a similar design and characteristics to the G150-G200-IIIA and G80-G100-IIIA launched in 2012 and 2013.
The new generators are available with two different frame-fuel tank configurations. The standard configuration offers at least 10 hours of operation at 75% of the load, while the 24 hour fuel tank is an option.

Within the control compartment all functions have been grouped together on a common, panel with easy-to-read analogue gauges.

A digital control panel version, offering extended parameter measurements and historical storage of events and alarms, is available as an option. A new switchable dual frequency 50/60 Hz feature is available with the digital controller for both models (option). The new generator units are EU Stage IIIA emission compliant at both 50 and 60 Hz frequencies.

Among Atlas Copco’s new launches is the QLB 60 light tower, which uses LED lights and special optics to deliver high luminosity on a small footprint. The four

350 W LED lights are said to give more luminous coverage than typically delivered by four 1 kW metal halide lights, and this obviously saves and fuel. The unit is also able to start up automatically based on light readings from a photocell and a weekly time, which again can save fuel.

Atlas Copco says the QLB 60 has the smallest footprint on the market, which cuts transportation costs, with the possibility of packing 22 units on a 13 m truck. There are galvanized forklift pockets and a lifting beam facilitate on-site placement, while the hydraulic masts extends to a height of 8m and offers 340° of rotation.

Also new from Atlas Copco is the five-model QES range of portable generators from 9 to 42 kVA. They are compact and stackable, while the Qc 1011 controller offers engine monitoring and protection features.

Ben Van Hove, vice-president of marketing for portable air and power within Atlas Copco’s Portable Energy Division said the increasing sophistication of control and monitoring systems was another clear trend in the industry.

New from Wacker Neuson is the LTN6LV light tower, a variant of the LTN6L, with the V signifying that it can be move with the tower in a vertical position for speedy relocations. This is thanks to the compact tower, which largely disappears into the housing when lowered.

In addition, the model LTN6LV the features of the existing LTN6L. The four elliptical halogen reflectors can be manually aligned independent of each other on two axes in order to optimally illuminate the required area. And they can be rotated using
a push-button when the mast is up.

Wacker Neuson also offers LED lights as an option or retrofit kit for both models.

In the compressor segment, Chicago Pneumatic has introduced new versions of its CPS 11.0 (7 bar) and CPS 11-12 (12 bar) portable compressors for the European market. They feature Stage IIIB Deutz engines and a new electronic control panel, and are designed for applications such as drilling, abrasive blasting, road work and shotcrete pumping. The 12-bar variant is also suitable for special applications such as fibre optic cabling, with the higher working pressure enabling the CPS 11-12 to push cabling through longer pipeline distances.

The central electronic controller provides operators with an improved user interface and straight forward control and monitoring options. The electronic controls also make it easy for operators to quickly start and stop the compressor and regulate automatic cool-down after the unit has been running at full load.

With 175 litre fuel tanks the CPS 11.0 and CPS 11-12 compressors can be run non-stop at full load for an entire shift without refuelling. A fully automatic step-less speed regulator also means the engine speed can be adapted to air demand.

New from Doosan Portable Power is the Stage IV compliant 12/154 compressor, the company’s largest single axle portable compressor and the successor to the 12/150. The 6-cylinder Cummins engine offers 168 kW of power to allow the delivery of 14.9 m³/min at 12 bar.

The unit incorporates four air outlets as standard and is intended for construction, rental and quarrying applications including specialist uses such as drilling, abrasive blasting, spray painting and optical fibre blowing. Doosan says the modular design of the 12/154 allows optional equipment to be easily added so it can be adapted for specific applications, such as fitting an after cooler and water separator system for abrasive blasting.

Kaeser meanwhile is extending its mobile compressor range with the introduction of four new models, the M58, M58 Utility, M81 and M82.

The M58 and M58 Utility, a truck-mounted version designed for stationary applications, cover flow rates up to 5.6 m³/min at 7 bar. Powered by a Kubota diesel engine equipped with a particulate filter, these versatile units ensure full compliance with the Tier 4 Final emissions standard. A 10 bar version is available for applications such as sand blasting. blasting applications.

The M81 and M82 offer a flow rate of 8.4 m³/min at 7 bar, the difference is the engine – a Stage IIIB version for Europe and a Tier 4 version for North America. Both units feature maximum pressures of 14 bar and can be configured with a wide range of compressed air treatment options.

All four models come equipped with the Sigma Control Smart compressor controller, with its colour display of all operating parameters, alarm notifications and upcoming required maintenance. It also enables reliable and convenient start-up at the push of a button as well as straightforward and precise reductions in the working pressure down to 5 bar, in increments of 0.1 bar.

This highlights the point that more sophisticated control systems are aiding fuel economy and ease of operation across the board, while the generator sector is leaping into the hybrid world for even greater savings in running costs.