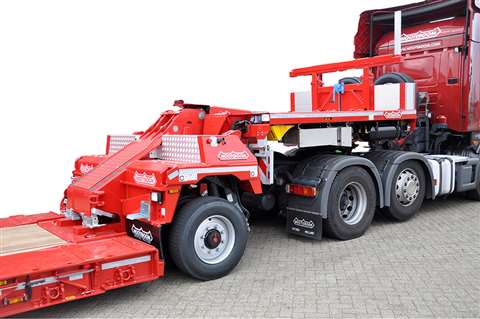 The new Euro Pendel-X low-loader with the latest fixed Interdolly, type IF, was shown at Bauma for the first time in Munich

Netherlands-based specialized transport manufacturer Nooteboom has unveiled two new products at the Bauma exhibition in Munich. The latest additions to the company's product range is the Manoovr MPL semi low-loader with 10 axle lines (3 + 7) and a multidolly, and the Pendel-X Euro low-loader with the latest generation IF fixed interdolly.

The Manoovr MPL semi low-loader was introduced in October 2015 but Nooteboom is showcasing a new Manoovr model with 10 axle lines and a detachable multidolly - a world first, said the company.

It has a steering angle multidolly of 70 degrees, a stepless variable hydraulic fifth wheel load/axle load ratio from 18 to 30 tonnes with a 12 tonnes axle line and no vulnerable components, said Nooteboom. It has a total weight of 150 tonnes at 80 kilometres per hour, a low dead weight and a single or double extendible load floor with optional extra width extension.

The new IF fixed interdolly - Euro Pendel-X low-loader - is said by Nooteboom to have a weight saving of 1 tonnes and a 35 centimetres shorter assembly length. The latest fixed Interdolly, type IF, which is equipped with a simple (in 6 positions) mechanically adjustable fifth wheel load. The Interdolly and the hydraulic gooseneck form one unit, and is available with 1, 2 and 3 axle lines and with various neck lengths for a 6 x 4, 8 x 4 and 10 x 4 tractor.

Nooteboom explain that other advantages of the new model include a 70 degree steering angle, an adjustable fifth wheel load of 18 to 30 tonnes and easy operation.