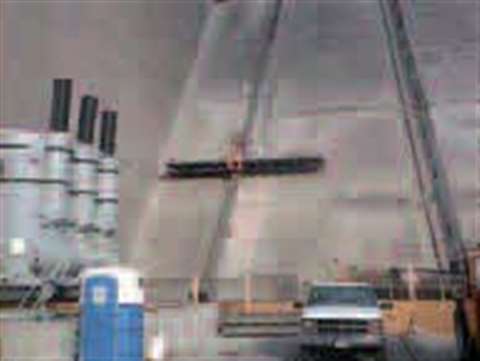 The mast climbers provide access to repair the concrete face of the dam.

Repairing the inclined concrete face of the Robert Moses Dam on the US side of the Niagara Falls was never going to be a straightforward matter, with gaining access to the work areas being one of the main challenges. However, contractor Crane-Hogan Structural Systems, working with Canadian mast climber manufacturer Fraco and its local dealer Bison Scaffold & Masons Supply, have together created an elegant and flexible access solution.

The hydroelectric dam is owned by the New York State Power Authority and began operation in 1961. Although some repairs have been carried out on the face of the dam since then, this US$13.3 million contract is the first major renovation of the structure. The project, which started in 2004 and should finish in 2006, is to remove and re-cast patches of deteriorating concrete covering approximately 10% of the 500000 ft2 (46500 m2) dam face. The average depth of repair is 5 in (0,13 m).

Access difficulties facing the contractors are because of the inclines of the dam face and penstock structures that feed water from behind the dam to the power station below. Inclines vary from 44 to 51 degrees over the bottom two-thirds of the otherwise vertical dam face, and the penstocks restrict access along two-thirds of its length.

“ Swing stages were not going to work on the sloped areas due to all the formwork that we had to do,” says Stephen Hess, Crane-Hogan's project manager, speaking to AI on site. Mr Hess says safety concerns were paramount in the selection of the Fraco units; “The main technical challenges are getting the manpower up there and doing the concrete removals. The safety end of it is crew safety and to catch the concrete debris so it is not hitting the people and the buildings down below.”

Re-engineering on the level

Fraco and its Buffalo, New York-based dealer, Bison Scaffold, were contacted by Crane-Hogan to begin the access project. After reviewing dam plans and meeting with Crane-Hogan and power authority officials, Fraco began re-engineering Fraco's hydraulic ACT mast climbers for use on inclined surfaces.

“ This equipment was designed to work on a vertical wall,” says Gabriel Talbot, a mechanical engineer at Fraco, “For this project we had to make some major modifications on the elevating units. We had to change hardware and did many calculations concerning the stress levels to make sure that nothing would fail.”

The major design change affected the mounting of the power unit. Dave Pera, owner of Bison Scaffold, explains; “Before this project and their involvement with Crane-Hogan, Fraco never had an ACT unit climb an angle because the power unit had to remain level. They had to re-design the machine to keep the power unit level while the machine climbs on a 45-degree angle. That redesign was most of the project work last year.” The re-engineered ACT unit allows the power unit to remain level independently of the main structure's orientation.

After re-engineering to handle inclines between 45 and 51 degrees and manufacturing of the first six units, Fraco sent a representative to the site to help with their set-up in 2004. (Crane-Hogan added a further two ACT machines this year.)

The wall was sub-divided into three sections. One section is worked each year of the three-year project between mid-April and the end of October, prior to winter's onset. (In winter mast sections remained bolted to walls, and platforms go into storage.) Work this year should be easier because it covers an area without penstocks, but next year's will tackle the last, section, which has active power lines.

Rising to the task

Wedge bolts ensure mast sections grip the walls, and spring-loaded ‘dog locks’ lock off to steel steps welded to masts every two feet. As units rise, the locks spring out and latch onto the dogs so that the ACT platforms cannot fall. Coming down, the dogs are released by simultaneously releasing a handle and pushing the descend button. If the handle is released, the locks engage automatically.

One tricky task for the contractor is to negotiate the dam's penstocks. “They have to mount an ACT on the top and another ACT in between,” says Mr Pera. “The penstocks make things tricky because we have to reach their sides to chip out the concrete and the area around the chipping has to be cleaned out and then formed to replace the concrete.”

The project has provided few major problems for either Fraco or Crane-Hogan. However, one glitch in the design was discovered only after the concrete was chipped away and the forms were being setup. “We never anticipated the clearance of the bottom of the mast climber platform to the top of the forms,” says Mr Pera, who points out that it was Crane-Hogan employees came up with the solution. “A shim [a thin steel plate] attached to the wall ties gets the unit higher off the wall. The original wall ties, located every 20 feet [6.1 m], look like steel boxes. What we did was make a block with two holes that just sits there and gives us another six inches.” New wall ties are being manufactured that eliminate the need for shims.

Everybody seems pleased with the way the platforms have performed. Dave Pera notes that the ACTs are very maneuverable and can take workers to within inches of the desired height. Also, their stability and safety benefits allow their use in bad weather conditions. “It's a rigid platform,” he says, “It allows the crews to work on days when they couldn't work on a swing stage.”

Crane-Hogan's Steve Hess is also satisfied. “We had some things that we did not really anticipate, but we didn't have any big surprises,” he says. “It doesn't take that long to setup the ACTs and to learn the setup procedures. We worked with a Fraco installer for a week, and after that we felt confident enough to put up the rest of the equipment. It took us a couple of hours to learn all aspects of the machine.”

Bison Scaffold's Dave Pera can often be found at the power plant to respond to any problems and to ensure that deliveries are made on time. “They are counting on equipment to be there,” he says.

For Fraco, the project is a high-profile calling card for such projects in the future. “We can now say that we can provide an answer very quickly for any similar project because we have the knowledge and experience of the Niagara Falls project”, says Fraco's Gabriel Talbot, “The re-configured ACTs are not standard products in our inventory, but we have the design. It's ready to be used again.”