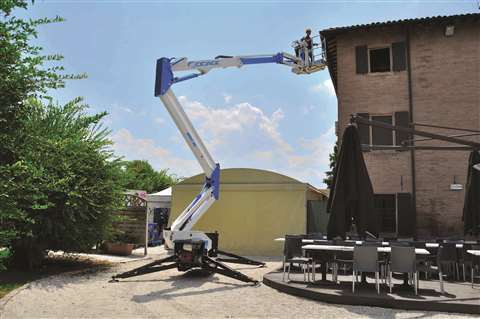 Socage will launch a new series of compact articulated tracked platforms at the end of this year. The first will be the 17.2 m working height Forste 17SJ. It will have a 7.8 m maximum outreach and 225

The tracked platform sector is undoubtedly a niche sector of the aerial work platform market, but it holds a great deal of potential thanks to advances in technology and a growing realisation of its attributes from users.

With the biggest customer base in Europe, manufacturers are looking at the likes of the USA and emerging nations, such as the Middle East and Eastern Europe for growth. The general consensus is that tracked platforms hold about 3% of the total world AWP market, with major growth on the horizon in the USA, and a feeling that regions like the Middle East should be buying tracked platforms by the dozen, but are not doing so yet.

As Laura Gasparini, export manager at Palazzani Industrie explains, the sector may be niche for now, but there is little option than to use tracked platforms in key applications. “Thanks to their lightness and compact dimensions, tracked platforms cannot be equalled in places where aerial work is difficult, like historical monuments, churches and mosques, medieval towns, shopping malls, terraces, town centres, parks, airports, and so on,” explains Ms Gasparini. And according to Mirca Negri, Hinowa export engineer, “tracked platforms are growing faster than other types of MEWPs because many people do not know about them yet.”

Two factors helping that growth are Lithium batteries and the attitude of rental companies to this type of equipment. Let’s take a look at rental first. In the past tracked platforms’ have lacked user friendliness, with complicated set up and operation, outriggers that needed to be individually adjusted, reduced power during indoor and electricity cables that need to be supervised at all times.

As Florian Büscher, marketing manager at Teupen, explains, “The equipment rental industry is one of the most important channels for the entire tracked lifts industry. Rental companies are looking for everything that increases a better marketability of the relatively new tracked lifts such as a consistent and simple to use control concept. Furthermore, everything around the product must help rental companies to have more success.”

An example comes in the manufacturer’s latest model, the 21 m working height LEO 21GT. It has unrestricted 12 m outreach with 250 kg basket load. Transport weight is 2950 kg. The track chassis is height and width adjustable, while the machine stabilises on a 30% slope. It has a corner-mounted, 180 degree rotatable basket.

Hinowa is actively targeting rental companies with its two latest machines, the tracked Lightlift 17.75 Performance IIIS and Lightlift 20.10 Performance IIIS with 17 m and 20 m working height, respectively. “With the last two machines we have increased capacity and they are much quicker, compact and user friendly. Rental companies also need reach and height, with, as in the past, lower pressure on the ground with non-marking tracks,” explains Mr Negri.

Both Hinowa machines offer 230 kg capacity, with up to two operators, across the whole working area, a wide working envelope at 7.5 m and 9.7 m continuous outreach for the 17.75 and 20.10, respectively. The machines are made of lightweight steel and include bushings without grease designed for a long life without lubrications - saving time and money.

Gianpiero Marti, at fellow Italian manufacturer BlueLift, thinks big rental companies will embrace the tracked platform. “For Scissors and self-propelled machines rental rates are going down because there are more competitors. The tracked platform will be a way of moving out of this conflict and making a profit.” BlueLift’s latest model is the lightweight 17.8 m working height SA18. It offers a 9.3 m outreach from a 3 x 3 m outrigger set up with one person in the basket. It’s good for rental says the company and can be transported on a trailer.

As a result, BlueLift foresees tracked platforms will make up 5% of the total AWP market in the next three years. But Palazzani’s export manager, Ms Gasparini, is aware of the shortfalls of these products. “The use of tracked platforms, particularly the highest, requires the presence of a specialist operator. So, Palazzani is making significant innovations to its range to make them easier to use than the previous models, both in set-up phase and aerial work operations.”

Ebbe Christensen, president of US BlueLift and Falcon distributor ReachMaster, agrees. “They are more nimble, more fragile; they do take more training, because they have more technology than booms or scissors,” adding, “The secret behind a lot of those things is CAN bus; auto setting is certainly something that is a big help, and safety features, for example, if you change elevation while driving by more than five degrees, the machine goes down to half speed.”

Mr Christensen adds, “Rental has started to be a major buyer in the US because compact 12 m to 22 m track lifts do all the things from a reach point of view of scissors and booms in that range, but it’s a much lighter, more versatile machine. It’s almost like the tip of the iceberg – rental has been reluctant, but rental has now finally seen that big applications are being solved by other machines in a less efficient and less safe way,” says Mr Christensen.

Another general advantage, adds Mr Christensen, is delivery, “where booms and often scissors have to be delivered to site on multi-axle trailers, tracked platforms can be transported on smaller trailers.” Some 50% of Reachmaster’s sales currently go to rental companies. “I would not be surprised if rental will become the most dominant sector,” adds Mr Christensen.

Great rental potential also lies in Europe says Mr Negri, “Since the recession rental companies have been looking for alternative products, and we are seeing smaller rental companies more interested in trying some in their fleets.”

There are mixed views from the manufacturers when it comes to Lithium technology. The USA, with its 110 volt mains electricity supply, compared to 220 volts in other countries, lends itself to Lithium as it can offer greater and longer lasting power, rather than having to rely on the relatively low mains supply. The downside is that it is very expensive, up to four time more than a standard battery.

Mr Büscher at Teupen says, “We are keeping an eye on the advances in Lithium technology. But with tracked machines weight and space limitations as well as reliable power supply are important factors. At the moment we do not see this introduced as a technically mature mix in the market by any tracked lift manufacturer.”

According to Hinowa 50% of tracked platforms in the USA are Lithium powered, compared to 20% in Europe. But Mr Negri is confident that figure will grow despite the higher 220 volt supply, which provides better speed and operation capabilities. “In Europe, there is real potential for Lithium. People are interested in pollution and the environment.”

For Carlo Molesini, managing and sales director at Italy-based Platform Basket, “Lithium is the future.” He adds, “It is still quite expensive, but I am sure that in the future we will be able to produce enough power for products to complete a day of work – that’s the mission. Ultimately, engines will disappear, and you will have the same performance and same working cycle,” Mr Molesini continues, “Even arborists and people working outside are looking for battery power as they are working early in the morning, close to schools and hospitals, etc.”

There is full agreement from Mr Christensen. ReachMaster represented Hinowa in the US before the Italian manufacturer set up a deal in 2010 to supply tracked platforms to JLG. “When we started with BlueLift one of the main focuses was to have them design the Lithium system that we have today. The strength of this type of machine is its versatility for inside and outdoor use. While smaller machines have been able to operate with 110 volts, the drive speed for 22 m or 23 m is like watching paint dry.

There are also a lot of applications using bigger booms that are more difficult to transport, and/or they are using ladders or scaffolding. In these cases tracked platforms can come and do the job much quicker and safer.

Nevertheless, Lithium remains a luxury for the likes of the USA and UK, says Mr Marti at BlueLift. “They are prepared to pay for this solution, but other countries are not yet prepared to pay. If the price of lithium technology goes down I am sure other markets like Italy will follow.

Further developments will come from telematics, says Mr Molesini. “The future is with management systems that allow manufacturers and rental companies to maintain their machines from a distance.”

And on a positive note, Mr Büscher concludes, “The market may still be a niche but the product itself is not. Tracked lifts are the perfect mix of all positive qualities of boom, scissor and trailer lifts without their disadvantages. “With rising acceptance and increasing market penetration tracked lifts will be established more and more as a standard equipment that many rental companies and end-users will know and value.”

HDW, part of the TVH Group, is the distributor for Terex AWP and Tuepen in the Benelux region and the whole of Eastern Europe. It distributes diesel-powered Genie Trax telescopic booms, the latest being the S-45 Trax, a pair of which have recently been delivered to HDW.

The company says thanks to its patented ‘four-point’ Trax track drive system, the machine offers improved terrainability and reduced damage to sensitive ground surfaces. It has a lift height of 14.2 m, a vertical reach of 11.2 m and a gross weight of 7927 kg. The oscillating axles are also patented, and allow the tracks to maintain contact with the ground on uneven and undulating surfaces to retain maximum power and torque.

According to HDW’s Remko Jonkergouw the Netherlands is ideally suited to this type of equipment, as well as other types of tracked platform, because of its relatively weak ground conditions. “Some 50% of the ground is below sea level and used to be under the sea.”This means that tracked platforms make up about 10% of the AWP population in the Netherlands, compared to the 3% worldwide average. Mr Jonkergouw says 80% of tracked platforms are used inside, but feels the features of the outdoor-suited Genie Trax will have a serious impact on that remaining 20%.

Talking about the tracked platform market in general, Mr Jonkergouw adds, “Eastern Europe is an upcoming market, but generally still in its infancy. Poland and Czech Republic are way ahead, but if you look at Romania, Moldavia or Slovakia, the idea of renting machines is still developing. Even using tracked machines is not so popular yet. We are succeeding but the penetration rate is very low compared to other countries. They need to learn rental first, and tracked machines will follow later. We think in 3-5 years Eastern Europe will be at the same level as Western European countries.”