Almost 130 tonnes of carbon emissions have been saved on one of Nixon Hire’s customer’s sites over a period of four weeks as a result of using the rental company’s Solar Pod. 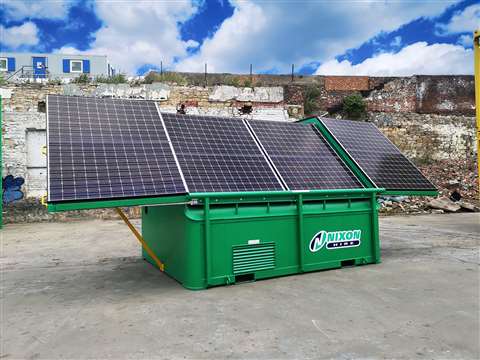 Graham Nixon, Managing Director of Nixon Hire, said, “With the largest solar product fleet for hire in the UK, Nixon Hire have heavily invested into the ever-growing renewables sector.”

Earlier this year, Nixon launched its ’20 by 20’ initiative to reduce the construction industry’s carbon emissions by supplying 20 companies with its Solar Pod for one week free of charge.

The Solar Pods harness solar energy via photovoltaic panels that is either used directly as electrical energy or is stored in an internal battery bank.

The unit is supported by a back-up generator that kicks in only when the solar resource has been depleted.

Nixon said, “In short, free and zero-carbon energy is used and created as long as sunlight is available to the unit, making it suitable for use in the UK all year round.”

Nixon Hire plans to increase its fleet of Solar Pods, which it developed in partnership with manufacturer AJC Trailers.