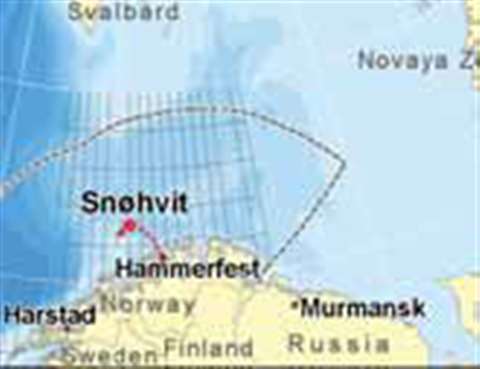 The LNG plant in Hammerfest, Norway will be the first natural gas liquefaction and export plant of its kind in Europe. Huge volumes of natural gas from the Snøhvit project in the Arctic's Barents Sea will flow through the completed Euro 8 billion (US$11.3 billion) construction project.

Work began in 2003 and the site is due to open for ordinary production in the third quarter of 2007. Norwegian crane services company Vest Kran has been involved with a range of lifting applications on the arctic island since the start of the project.

Patrick Floreal is superintendent at Fabricom, a company that assembles prefabricated modules for the oil and gas industry. It is part of the Suez group. Floreal, a Belgian, explains how the construction of the LNG plant presented unusual difficulties and challenges.

“The weather conditions have been very tough and have caused a lot of problems. We quickly learned to be cautious concerning the elements here in the Arctic. Every outdoor activity - especially lifting - had to be carefully considered.

“In December it is constantly dark. In the middle of the day it is hard to read a newspaper without electric light; if you can even hold the paper, of course. The cold is not too bad here because of the Gulf Stream, but the wind is.”

Floreal has been at the project for two years and recounts a big winter storm last year, which, he says, he will remember for the rest of his life. “It was cold, snowing and the wind was very strong. Spray from the seawater had blown over the plant and soon everything was covered in thick ice. The entire island was evacuated. Everything stopped for many days. But the most unbelievable thing happened to one of our employees. He was outside his car when the wind lifted him one metre above the ground and slammed him down so hard his leg broke in three places. Another man was blown into a wall and broke his arm. The conditions are tough here.”

Four seasons in a day

Vest Kran has been on the island since the project started in 2003 and has been involved in almost every step of the construction process. One of the jobs involved hoisting concrete sections for the administration building, which sounds relatively straightforward but, as Floreal explains, the unpredictable weather conditions were a challenge. Now, towards the end of the project, the most typical lifting jobs are hoisting equipment and lifting personnel to inspect the construction work.

Fredrik Hoddø, who operates a Demag AC 80-2 all terrain mobile crane at the site, describes the difficulties caused by the weather. “We can experience all four seasons in one day here. The weather changes so quickly it is hard to believe. Every job we are planning to do has to be analysed for safety. As a crane operator I need to know how to react if the wind rapidly increases in the middle of the lifting operation. The plant is filled with gas now so we have to know what to do if the hoist has to be cancelled mid-air. I need to know where to land the cargo safely.”

As if life was not already difficult enough, the hydrocarbons contained in the plant's pipes and tanks means the crane's diesel-powered cabin heater cannot be used.

“After a few hours in the icy wind it gets pretty cold, even though I'm sitting inside the cabin wearing my heavy parka. Imagine the men outdoors when they are hanging in the man basket directly exposed to the elements. That's a cold job.”

Due to the environment, the owner of the Snøhvit plant, Statoil, does not use salt to melt snow and ice from the roads, instead it uses sand to secure the slippery roads on the island. Therefore, the use of protective eyewear is mandatory.

“But man, I'm glad for them when the strong wind is blowing and literally picking up gravel from the ground and scrubbing your face,” explains Floreal, adding that the summer months can be even tougher.

“For us used to normal light conditions in mid-Europe the seasons so far north are a real challenge. The midnight sun and full daylight in the summer is, in a way, harder than the months of darkness in the winter. I find it difficult to sleep and have to cover my windows with black plastic bags to darken the room.”

Floreal says the project had been a valuable learning experience for all concerned. “The safety aspect has grown in strength and is the base of all operations here. As constructors on the site we have to have safe job analyses on practically all jobs. Because the climate is so extreme here and the weather can - and will - change in a matter of minutes, we have to know every possible aspect of the jobs,” he adds.