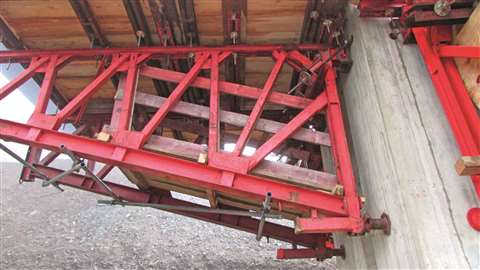 Lying horizontally, the 4.5 m­-high Meva support frame provides a solid base for platforms

Engineers are finding ways to extend the spans of bridges; architects are producing ever more exotic bridge designs.

Of course, construction teams must put the theory – which looks so good on paper – into practice, which is where the trouble often starts.

Fortunately for those contracted to build bridges, equipment manufacturers are also working overtime to devise machinery to ease the burden. For example, one vital element, which can comprise up to 40% of a bridge project’s construction cost, is formwork.

The thing about formwork is that it is not pretty; in fact, one might say it can look positively outdated. But the best of this specialist equipment is brilliantly engineered and generally requires specialist engineers on site during construction, to ensure a safe and efficient build.

A good example comes from the ongoing Doha Metro project in Qatar, where a 5.8 km viaduct will be one of the network’s few elevated sections.

As far back as the tender stage of proceedings, the consortium which ultimately won the contract – FYAP JV – consulted with RMD Kwikform on the required formwork and shoring for this section of the project. 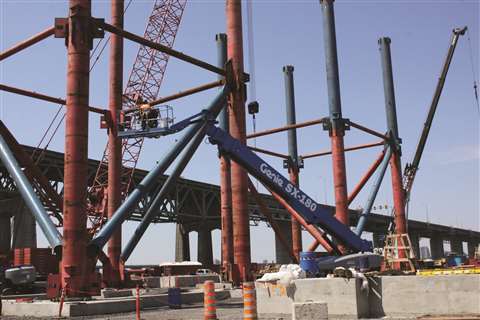 In the first instance, due to the elevation and varying slopes of the soffit, RMD Kwikform produced 3D designs and conducted 3D frame analysis, to create a solution fit for all the relevant teams on the project, using only standard components. In total, the firm delivered 3,536 tonnes of equipment to site, including Megashor and Kwikstage, Rapidshor, GTX and Aluminium Beams, and Superslim Soldiers.

Ahmed Awaly, from RMD Kwikform, said, “We provided our heavy duty Megashor system to support the launching gantries during their erection, and at the passing of one of them above the 13 m bridge deck. The system can be adjusted to support various heights and lengths and, due to its high load capacity, Megashor granted each team flexibility and stability. For the large piers, we used Megashor legs and steel Superslim Soldiers to laterally support the permanent works.”

On a motorway bridge north of Frankfurt in Germany, Meva’s formwork proved both its strength and versatility; whereas the STB 450 system is normally placed vertically, on this project it was put to work horizontally.

On the Champlain Bridge project in Canada, Bauer drilled 200 piles, ten of which were installed offshore

The foundations and the long sides of the 50 m­-high piers, as well as the end faces, up to 14 m below the top of the pier, are being poured using Meva formwork. Up to this height the Mammut formwork is climbed using KLK 230 climbing brackets. The board pattern of the concrete surfaces is created using a wooden facing attached to the panels.

At a height of 14 m below the top, the piers flay out symmetrically to a width of 12 m. The top 14 m are being poured in two cycles, with heights of 7.5 m and 6.5 m, respectively. For the curved end faces, special formwork, supplied by the construction company, is being used. The heavy, 12 ­m-long and up to 8­ m-­high units, made up of Mammut panels, require Triplex braces which, in turn, require sufficiently large platforms.

With the formwork rotated 90˚ to lie horizontally, the 4.5 m­-high support frame provides a solid base for platforms with a width up to 4.5 m and thus sufficient space for formwork and braces.

Piling on the pressure

In Montreal, Canada, the 50-year-old Champlain bridge spanning the St Lawrence River is one of the busiest in North America, with up to 50 million vehicle crossings a year.

Due to extensive wear and road salt exposure, a replacement bridge was commissioned, and, at an estimated cost of

CA$4 billion, the new 3.4 km-long bridge is now under construction. 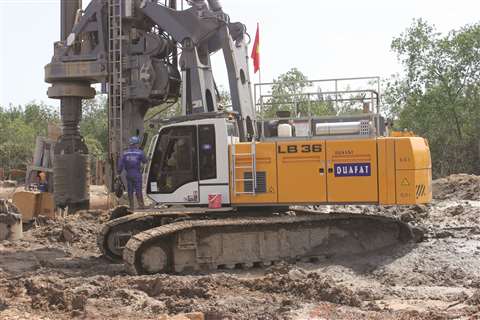 Working on the project since October 2015, Bauer Foundations Canada has installed a total of 200 concrete piles with diameters of 1,300 mm and 2,000 mm.

The fact that ten of the piles were located offshore in the St Lawrence River was one of a number of engineering challenges for Bauer to overcome.

Bauer said the ground conditions at the site consisted of loose to very dense sand with occasional boulders, pieces of rock, clay shale and bedrock, as well as calcareous shale with a hardness of over 120 MPa (megapascals).

Two Bauer drilling rigs, a BG 28 and a BG 39, were used for installing the piles, with depths of up to 26 m; the offshore drilling was carried out from barges. Additional concrete pumps were used to bridge the long distance from the shore to the pile location in the middle of the river. 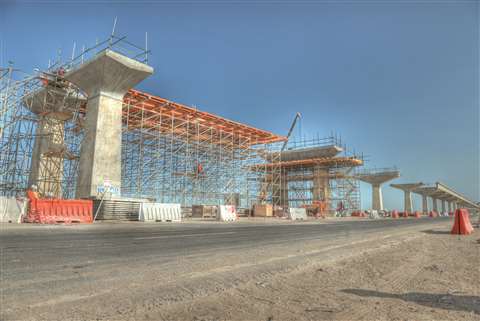 A number of the piles were drilled in the winter season, so special measures had to be implemented to allow working in temperatures as low as minus 25˚C.

Also set to work on the project were a number of telescopic boom lifts from Genie, which needed to be properly prepped for working over water.

Dickie Moore Rentals and Genie’s Stephane Riggi worked with the contractor, Signature on the St Lawrence Group (SSL), to address the environmental requirements.

Dicki Moore said, “The specification called for a special type of biodegradable hydraulic oil that returned to 60% of original after 28 days and with a content of at least 80% biosourced. Only a few manufacturers make this special type of oil. Normand Lapikas with Crevier Lubrifiants was extremely helpful in educating us on the different types of biodegradable oil and selecting the right oil for the application.”

Riggi also spent time with SSL operators to provide familiarisation training on the equipment so that they could get the most out of it. He said, “While these were seasoned workers, each boom lift brand and model has its own set of specific operating and safety features.”

Discussing the operation of the pumps, Moore said, “The Z-boom configuration offers a number of different up, out-and-over positioning capabilities for the Z-62/40 lift. It provides working heights from 12.5 m to just under 20.9 m, while offering a maximum 12.3 m horizontal reach.”

During construction, Genie’s SX-150 and SX-180 telescopic booms were used to fulfil SSL’s specialised access needs for the bridge structure that has certain points that reach heights of up to 61 m above the water. 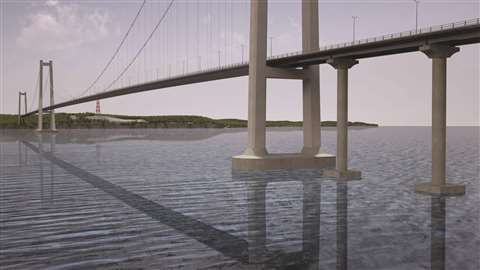 Artist’s impression of the Chacao Bridge in Chile

In the UK, The Mersey Gateway Project, currently in progress in the northwest of England, includes a 2.3 km-long bridge and a 9.2 km stretch of new road.

With time an important factor in keeping costs down on such a large project, reliable placement of concrete were a key concern for the contractor. The pump operator, Reilly Concrete Pumping, brought in Schwing truck-mounted concrete pumps, stationary pumps and placing booms, which have been used throughout almost four years (to date) of construction.

In that time, some 127,000 m3 of concrete has been placed and the Schwing equipment has been involved in all phases of the project, including both the pylon foundations and the construction of the 80 to 125 m pylons themselves.

Of course, before concrete can be poured, the piles have to be bored, and that’s never as simple as digging a hole.

In northeastern Vietnam, the Hoang Van Thu Bridge will connect the centre of the port city of Haiphong with the North West suburb of Thuy Nguyen.

With a span of 200 m, the project might not appear too strenuous, but the western approach runs through cleared former mangrove swamps, making things considerably more challenging.

The problems for piling relate to the high water table, creating quagmire conditions. The foundations contractor, Dua Fat, relied heavily on a Liebherr LB 36-410 rotary drilling rig to tackle the vast majority (80%) of the 100 piles.

The rig had to overcome the waterlooged soil and soft sedimentary conditions for 50 m of the drilling, followed by 10 m of soft rock. The final 2 m of the pile entered very hard granite-type rock.

Dua Fat have confirmed that the Liebherr rig is able to drill each pile in just 20 hours. The project’s vice general manager, Mr Dao Van Dat, said, “It is our preferred drilling rig, since the other rigs take at least 28 hours to complete each hole in the tough waterlogged ground conditions.”

The rig can be used for Kelly drilling, continuous flight auger drilling, partial and full displacement drilling, or double rotary drilling, and can drill to a maximum depth of 80 m, with a drilling diameter of 3000 mm.

Perhaps faced with an even bigger challenge for foundation piling was Xuteng.

Aurecon systems were utilised on the Meydan Bridge, Dubai

In Guangzhou in southern China, the local construction company was tasked with drilling piles for the foundations of a railway bridge for the Nansha Port Railway. Although only 80 km in length, the line is significant in freight terms, as it forms part of the rail network that connects the region with Beijing in the north.

Part of the challenge for the contractor was that the railway bridge is 1,119 m in length – and has a main span of 450 m – making it the world’s longest double-line railway arch bridge.

Making the challenge for constructing the foundations even greater, the survey showed very complex geological conditions under the main pier.

The bridge design placed 30 main piers in the water, which required an average drilling depth of 108 m, 55 m of which was into rock. A further 30 piers on the shore had to be dug to 98 m, with a rock depth of 45 m.

With a tight schedule adding to these challenges, the contractor decided the traditional impact holing and reverse circulation technologies would not be suitable for the project, and opted to drill cast-in-place bored piles in hard rock with large-diameter long-hole technology, using a rotary drilling rig.

The power head of XR550D possesses two modes: general and rock-entering, with functions of the automatic rotary featuring seamless switching, which makes it suitable for construction in hard layers. 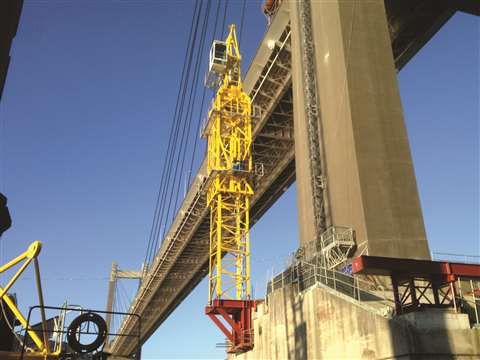 According to XCMG, the XR550D rotary drilling rig has the largest-tonnage capacity of any drill rig in the world

Every serious bridge-building project requires a serious crane – or two. A case in point is the joint venture between Dragados and Grupo Puentes, which is currently working on the Rande bridge, near Vigo, in the northwest of Spain.

When the bridge was built in 1981, the volume of traffic required two lanes in each direction. Recently, however, it has become necessary to plan an extra lane in each direction. Rather than attempt to add extra lanes to the existing bridge deck, the decision was made to construct a new deck.

Dragados brought in two Linden Comansa 21LC400 18 tonne cranes, and then had to build a special steel structure in each pylon, as a foundation for each crane.

With each crane boasting 29 mast sections, adding up to a height of 163 m, it was important from a safety perspective that strong and complex ties were put in place on the pylons.

While both of the tower cranes are currently functioning admirably, the erecting team has admitted it is not looking forward to the somewhat stressful job of lowering and disassembling them when their work is done.