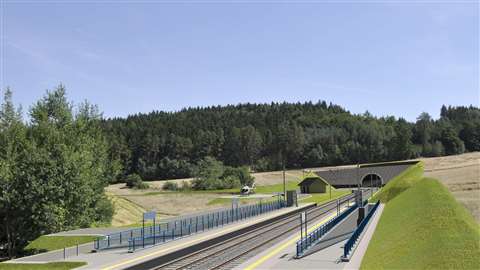 OHL ŽS, the Czech affiliate of Spanish-based contractor OHL (Obrascón Huarte Lain), has been awarded a €172 million contract to modernise the railway line between Sudoměřice and Votice in the Czech Republic.

Awarded by the Railway Infrastructure Administration, it was said to be the largest railway project in the region.

Co-financed by the European Structural and Investment Funds and the Czech Republic State Transport Infrastructure Fund, the project is intended to shorten journey times between Prague and the south of the Bohemia region.

Works will involve the construction of a second track between Sudoměřice u Tábora and Votice, two new tunnels – the 840m-long Mezno tunnel and the 660m-long Deboreč tunnel – and a new railway station.

The new layout of the track will be two kilometres shorter than the current route, and trains travelling along it will reach speeds of up to 160km/h. It has been estimated that, as a result, it will take one hour less to travel between Prague and Tábor.

Between the Ješetice and Heřmaničky stops, two bridges will be built, the largest of which will measure 244m in length.