Olympic House one of the world’s most sustainable buildings 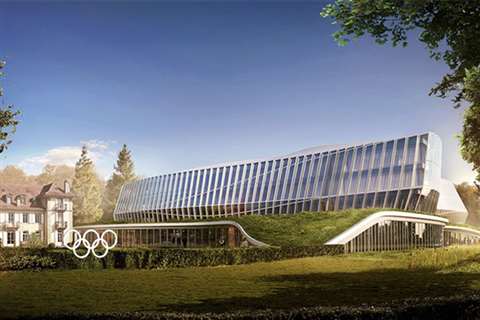 The new headquarters of the International Olympic Committee (IOC), Olympic House in Lausanne, Switzerland, is one of the most sustainable buildings in the world, according to the US Green Building Council (USGBC).

Construction on the building began in 2012 with great focus on sustainability, both in terms of the construction itself and in its energy efficiency.

In June 2019, as a way of recognising the project’s achievements, the Olympic House received the Leadership in Energy and Environmental Design (LEED) Platinum certificate – the highest certification level of the international LEED green building rating system.

Scoring 93 points on the scale, it serves as a representation that the IOC’s home is lowering carbon emissions and conserving resources, while prioritising sustainable practices and creating a healthier environment.

Solar panels and heat pumps will use water from nearby Lake Geneva to provide renewable energy to the building, which is expected to cut energy consumption by 35% and use 60% less municipal water than a conventional construction project.

As well as recognition from the USGBC, Olympic House has also been awarded the highest level of the Swiss Sustainable Construction Standard (SNBS), as well as receiving the Swiss standard for energy-efficient buildings.

The building was designed by Danish architecture firm 3XN, so that the IOC could bring together 500 employees currently spread across the city of Lausanne, Switzerland, under one roof.

Selected by the IOC in April 2014, after an international architecture competition, 3XN partnered with Swiss architects IttenBrechbühl to oversee the construction of the project.

The project also supported the local economy with 80% of the investment in construction being spent locally. Of the existing infrastructure, more than 95% of the former IOC headquarters was reused or recycled.