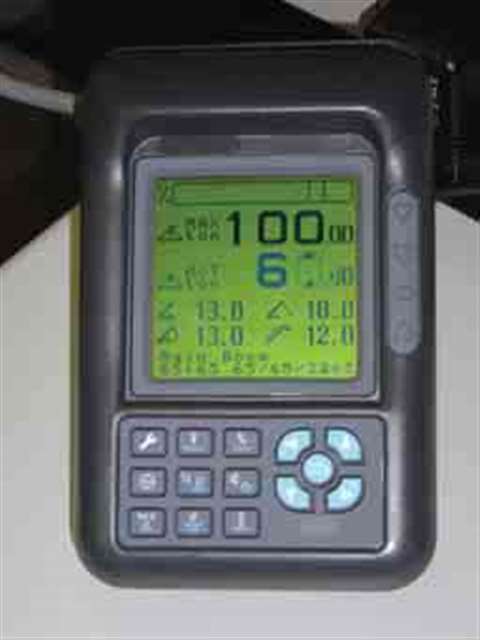 New from 3B6 is the Topshipper system. US and Australian markets will be a strong focus for sales efforts, the company says

Whether it is communicating information to the operator, calculating outrigger loadings or controlling crane motions, operators are relying more on the increasingly sophisticated devices becoming available.

The system is both for retrofit and OEM applications. Launched at last October's SAIE exhibition, the new design can be used with CANbus and traditional sensors. Installation is quick, Nicolini says, and a bonus for OEMs is that the same system can be used on a range of different crane types.

More than 100 duties can be stored in the Topshipper. All required information can be displayed at once on a screen with a resolution of 128 x 128, so there is no need to scroll through displays other than to find more detailed information. Topshipper can interface with other systems on a crane, including the electronic engine management system, and can display oil pressure, coolant temperature, etc.

Chassis self-levelling is another available function. This part of the system used to operate mechanically with a pendulum and potentiometer set up for the tilt sensor, but now an accelerometer is used that is a board-mounted chip. It is mounted on the chassis close to the centre of rotation in an epoxy potted IP 67 enclosure. Following practice in the automotive industry the system's design means easier cabling with no in-line connectors, and new sensors can be added at any time.

Inter Control from Germany has a new man-machine interface product called digsyCGM-TC that is described as a centralised information centre. It is designed to give the operator an overview of all the important data at one glance. The display is effected graphically, using bar graphs, pointer instruments and icons. Instead of monitoring potentiometers, signal lamps and switches the operator can focus attention on a single information centre that shows only the information necessary for the specific situation. Faults or limit violations are introduced via windows onto the display.

The digsyCGM-TC (Twin Can) has two independent CANbus interfaces, one working with the CANopen protocol and the other with J1939. By using a special tool the CGM can also communicate with devices that do not support any protocol, according to Inter Control sales manager Joachim Stratmann.

Users can programme the CGM, creating masks and windows with the Inter Control software CG-Designer. The application software-the logic assignments between the graphical elements and the process data-can be programmed using Inter Control software PROSYD1131 (a program to IEC61131-3 standard), making the CGM a complete control system, Stratmann claims.

To display load moment and other information Canadian manufacturer of wireless crane safety technology, Cranesmart Systems, uses large digits on a cab-mounted LCD screen, claimed by the manufacturer to be easy to read, day or night.

The Cranesmart is available as an anti-two-block system, boom angle indicator, load monitor or as a complete load moment indicator. Systems are offered for all crane types, other winch line applications, on- or offshore, for example, in marine and oilfield applications so components are available with intrinsically safe Class 1, Division 2 ratings and are suitable for operation in hazardous areas.

Plus 1 uses 'graphical terminals' (display screens) that can be customised to monitor the particular functions of an individual crane-from the basics, such as oil pressure, to machine tilt angles. The graphical terminals are designed to be easily visible, day or night to give operators and service technicians instantaneous machine operating information. External input devices allow for cameras, and multiple CANbus capability allows the capture of environmental monitoring, vehicle diagnostics and servicing data.

Crane manufacturer Kobelco's new load moment limiter is designed to improve the safety of crane operation. The LML has an adjustable colour screen making it easier to read in bright sunlight or in dark working conditions by offering more contrast than conventional LMLs, Kobelco says.

Most significant about Kobelco's new design, according to the manufacturer, is that the applicable lifting chart for the job is not programmed using codes, but is more easily selected from the walk-through computer menu by simply confirming the current boom and/or jib configuration, the type of hook, and the number of parts of line used for reeving the hook block. This method avoids the possibility of using the wrong codes, Kobelco claims. In addition, Kobelco's new LML is programmed with memory cards, instead of ROM (read-only memory) chips.