On the Edge: how Steve Smith transformed his company one clamp at a time 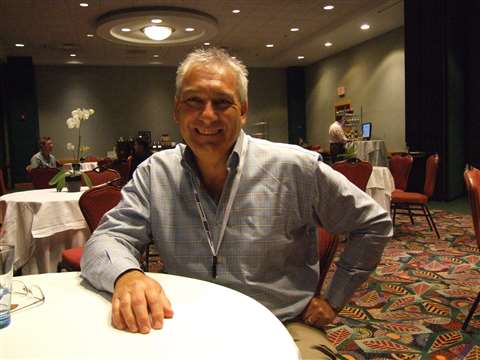 Steve Smith grew up in a steel town. And like most who might intertwine their community's roots into their business and personal lives, Smith joined the steel nation. "Everything was fine until the early '80s," Smith says regarding work, but then "we were having quite a tough time, there was a recession going on and so our steel business was struggling."

"They didn't sell any (clamps) into the US market at all," Smith says. "They basically sold them in England. But they knew that one of their customers was exporting them into the States because they had to put on an inch-sized nut instead of metric."

So it was clear there might be a market in the US for scaffold clamps, and in thinking this, Smith's former colleague approached Smith and asked if his steel company would be interested in representing them. "We said, 'Absolutely not!'" Smith says. "There has to be thousands upon thousands of users of this product in the States and we weren't set up for that. We were set up to sell to a limited number of accounts."

But in the meantime, after the dust settled, Smith started researching and found out about the Scaffold Industry Association (SIA) and met with the SIA to discuss how scaffolding worked in the US.

The system of scaffold in the US at the time was made up of a dozen manufactures who were represented by maybe 15 to 20 major dealers, Smith says. Amongst those were regional companies and local distributors. A few more calls and a few more hands shook and Smith realized no one in the US made scaffold clamps - all of the clamps were imported from either England, Germany or Italy.

"We realized - wait a second, you have this nice little pyramid and you've got a dozen companies up here who need to buy (clamps) from somebody," Smith says. "We don't need to worry about the thousands of users, we can just go after the manufacturers."

"We started out selling (clamps) to the manufacturers on a direct container basis," he says. "But then we started to realize there were people struggling to take on a $60,000 to $70,000 container load - they didn't need that many."

The way the US scaffold system was set up at the time was different from Europe. While the tube and clamp market in Europe was the bread and butter of commercial scaffolding, the US varied by using frame-type scaffolding most of the time.

"One time the factory in England sold more clamps in a month in the late '80s when business was booming than the entire consumption of the United States," Smith says. "There was a different demand and a different usage of the product."

The market might not have been as big in the States as it was in England, Germany or Italy, but there still was demand, and Smith saw that. He decided instead of expecting companies to hang out to clamps for six or even nine months at a time - that's how long a container-full of clamps would last a company - he would start to invest his money toward inventory and stock in the States.

"We started out with stock in Houston, Los Angeles and Philadelphia," Smith says. "And it grew from there, but at the time, we were still operating as a British steel company."

Smith knew he had to market himself and his company to get word out about his business. In Europe, because there were German, Italian and two British clamp companies, Smith's company was known as 'The Other British Company.'

"We needed a bit more name recognition," Smith says. "So since we were selling Edge clamps, we decided, 'Let's call it Edge Scaffolding.'"

With the help of the SIA, word got out and Smith set the business up to be advertised and marketed as Edge Scaffolding. "We took booth space (at the SIA event) and bought advertising in the magazine." Over the course of 10 years, from the late '80s through 1997, Edge started to get the recognition Smith had hoped for, and soon enough, the company became known as the experts in the scaffolding clamp field.

After splitting his business with his partner - Smith took on the scaffold clamp side and his partner took on the steel side - Smith took full ownership of Edge Scaffolding in 1993. But just as business started to flourish and the Edge name became well-known to many in the States, overseas competition waltzed into the US and a global credit meltdown changed everything.

"Various imports started coming in that were deemed from others as 'dangerous,'" Smith says. "I lost a lot of business as a result of imports - it went down 40, 50 then 60 percent in the early 2000s."

But one thing Smith is not is a pessimist. Adamant to stick to quality he knew from England, Smith knew his product was more expensive, but he also believes in, "you get what you pay for."

"So we stuck to the European specification," he says of manufacturing. Smith then used his role as chairman of the International Council for the SIA to help promote the Scaffolding, Shoring & Forming Institute's 2005 revision of test procedures. The standard, known as ANSI/SSFI SC100-5/05 is a standard for testing and rating scaffolding assemblies and components.

"We wanted to promote through the SIA's international council that all non-US manufacturers should review and test their products according to this standard in order to create a level playing field," Smith says.

Competition and safety measures brought awareness to many. "The best thing that happened to the industry was a realization that it is a global economy and even if you are only operating within the US, you still have to acknowledge that there is life outside North America and that these companies and countries are going to be involved on an ongoing basis," he says.

During all this, a global recession was stirring. A credit crash in the United States sent ripples across the world. Banks folded, the government bailed out financial institutions left and right, and consumer confidence is still weak. Nearly every industry has been affected by the recession and we are still nowhere close to recovering. We might be stable, but business is still hurting.

Projects are being pushed back which makes it difficult for companies that might be cash-strapped. "We'll see what happens with the stimulus package," Smith says. "If (the government does) what they say they're going to do with infrastructure - all those projects are going to need scaffolding. You just have to survive."

Smith looks forward to the next six years which will cap a 10-year strategic plan that the SIA formed in 2005. One of the main goals of the plan is to get off the Occupational Safety and Health Administration (OSHA) top 10 list of violations and accidents. "Scaffolding is still way up there," he says, "and so we want to get off that list, and the only way we can do that is by having a safer environment."

It's easy to peg Steve Smith as an optimist. He started out in the steel business during a recession and built a company that has weathered a few strong economic storms. During the worst of it all he doesn't like to paint 'doom and gloom,' and at the end of the day, no matter the money, he acknowledges that he wouldn't put his business up against his main competitors, because, frankly, he likes people and particularly the ones he works with.