The results of a survey conducted by City Hire, a tool rental company based in London, UK, about the expected effects of Brexit on the UK construction industry show a split in option that is strikingly – though perhaps unsurprisingly – similar to the split seen in the Brexit referendum itself. 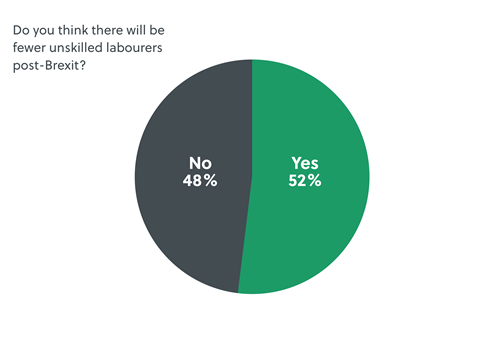 Of the 592 respondents, 52% expect there will be fewer unskilled labourers after the UK departs the EU, while 48% reckon there will be no fewer.

When asked whether there will be a lack of skilled construction workers post-Brexit, 51% said there would be.

52% of respondents believe wages in the industry will remain unchanged, while 35% are forecasting an increase and 13% a decrease.

Construction investment is expected by 44% of City Hire’s customers to decrease after Brexit, while 39% say it will remain the same and 17% predict a rise.

Looking at the current effect of ongoing Brexit negotiations, though, there is a general consensus that projects are being hindered. 78% of respondents said Brexit has caused projects to be put on hold due to costings and delivery delays.

Lionel Burgess, City Hire’s Sales Director, said, “With the uncertainty around the supply of materials sourced from outside the UK, contractors are waiting to see how their costs change before committing to a project at the risk of losing money.”