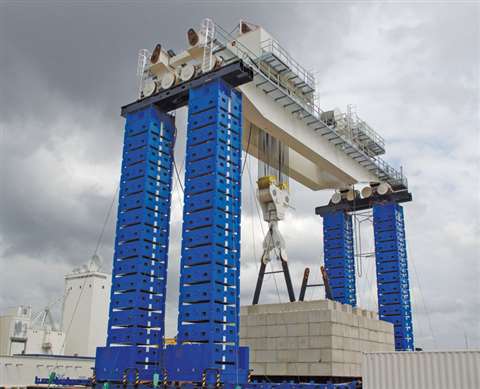 Enerpac has completed initial testing on its 4,800 tonne capacity crane for work in the Indian Ocean. Jeroen Naalden, Enerpac Integrated Solutions director, and Mart Hinnen, project manager, talked to Alex Dahm about the lifting and handling requirements and how they shaped the development of the world’s largest offshore overhead travelling crane.

Building an offshore highway involves lifting and accurately placing concrete foundation blocks on the seabed, positioning the supporting pillars and then assisting in the connections with the bridge deck. French consortium Bouygues Travaux Publics, VINCI Construction and Demathieu Bard Construction is constructing one for Réunion Island, east of Madagascar in the Indian Ocean. The 5.4 km Route du Littoral coastal highway will connect Saint Denis (the administrative capital of La Réunion) with La Possession. It replaces the existing coastal road which suffers from falling rocks and is hit by flooding and tropical storms.

To construct the highway a jack-up barge is being built at the Crist shipyard in Poland. On it will be an overhead travelling (OHT) crane with a width of 30 metres and a lifting capacity of 4,800 tonnes. With the barge jacked up in position the OHT will lift, move and lower the segments. The crane is classified A5 for the structure and M5 for the mechanism. It is designed to operate in a tropical marine environment to IP66 protection.

The offshore highway will be a multi-span bridge structure in the open sea, between 100 and 200 m from the shore. Each bridge pier consists of several concrete components. The 48 bridge piers are between 85 and 120 m apart. The bridge deck segments spanning the piers will be fabricated onshore and placed using conventional bridge launching techniques. There will be 288 heavy lifts in 144 cycles, each one as follows:

* at the designated offshore location take the load from the barge deck and transfer the load to its deployment position, lower the load and retrieve the unloaded hooks.

Key technical requirements for the gantry crane are the ability to lift, move and accurately place the loads in a tidal environment. Additional project and commercial considerations include: the weight of the crane; speed of handling, vessel time and cost; lifting systems costs; and cost of ownership.

The traditional choice for lifting operations of this type is strand jacks but there are alternatives. Another choice is winches to lift and lower and skidding or trolleys to move the blocks. The shape of the blocks is such that each requires four lifting points. Lifting would require either eight strand jacks or eight winches operating simultaneously.

Strand jacks are a simple, cost effective and lightweight method of lifting. It is a proven technology but the reciprocating movement of the jacks is unsuitable for this application. Speed limitations would extend the time for the next lift. Strand jacks require more maintenance and the service life would be too short. With replacement possibly every 10 lifts, the cost and disruption to the lifting operation on a project like this could be significant.

Winches, on the other hand, are better suited to this project’s lift, move, and lower sequence. They offer a better, smoother load movement. In addition, although steel wire ropes on drum winches require maintenance and even replacement, especially when exposed to salty sea air for two years, in this application normal lubrication of the wire is all that’s required.

Enerpac chose to use a reeved winch system, based on eight grooved drum winches, each with 500 kN line pull on the outer layer. Drum capacity is 800 m with a 52 mm rope. For proper spooling the winches have a drum with Lebus grooving.

A significant advantage of winches in this application is an ability to adjust the hoisting speed. The hydraulic circuit is a closed loop system with load-controlled flow. It means that when the hook is unloaded the speed of the winch can be doubled for a shorter load cycle.

Each block has to be moved into position after lifting it. Choices for the longitudinal travel of the gantry are either to use a skidding system or a wheeled arrangement. Skidding involves a push-pull action from hydraulic cylinders. Movement is incremental so there is a risk of generating unnecessary fluctuating movements in the load. Wear and replacement of the PTFE slider pads needs to be factored into project scheduling and cost-of-ownership calculations.

In this application the wheeled system offers advantages, Enerpac said. There is continuous movement of the block, the speed is variable and high speed is possible once the crane is unloaded. In addition, maintenance costs are lower.

There are two sets of wheels per lifting beam, giving a total of four for the two beams. Each set comprises four wheels, two of which are driven by hydraulic motors and planetary gearboxes. The wheels run on two parallel rails bolted onto the runway beams of the barge. The runway length is 80 m and the speed is between 0 and 100 cm/minute when loaded and up to 200 cm/min unloaded.

The winch and wheeled trolley arrangement allows smoother handling of the concrete elements and offers quicker lifting and lowering. Computer modelling of the operating sequence showed that with strand jacks and skidding it would take six hours for one complete block lift and placing cycle. With the winch and wheeled trolley arrangement it will take three hours.

For sideways movement to make smaller adjustments traversing the main beams when placing the load, a skidding system was chosen with long stroke hydraulic cylinders and PTFE slider pads.

There is a significant difference between the hydraulic power requirement for strand jacks and skidding versus winches and trolleys. Installed power is the main difference. To meet the required lifting speed a winch needs 55 kW while a strand jack operating at the same lifting speed will need 110 kW. The same applies on the hydraulic system for skidding versus trolleys. Here the push-pull system requires twice the volume of oil to achieve the same speed as the trolley system.

Although the installed power on the skidding and strand jack system is twice the amount, the cost difference is minimal. The main reason is that the hydraulic system’s pumps and valves for the winches and trolleys are more expensive because of the closed loop system and proportional valves.

The combination of hydraulic trolleys, eight synchronised winches with four crane hooks, side shift cylinders on the beams and the size of the gantry crane make this a major engineering challenge. Together the eight winches give the 4,800 tonne total. Without a load on the hook they will operate at up to 100 cm/min. When lifting and lowering a load the speed ranges from zero to 40 cm/min.

Final commissioning of the vessel with the crane mounted on it will be in October or November 2015 before the voyage to the Indian Ocean. Early 2016 should see completion of the overload testing.

For a hard copy of this story see the September issue of International Cranes and Specialized Transport magazine available at www.khl.com