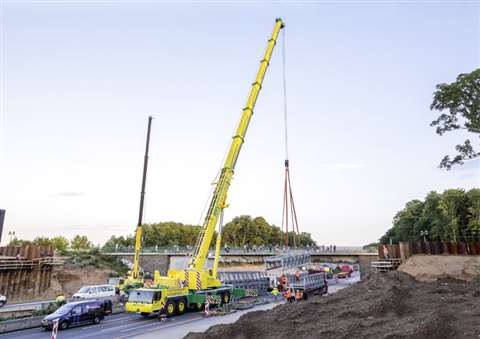 HKV Schmitz and Partner's LTM 1300-6.2 unloading a section of the temporary bridge from a low-loader

Crane and transport service provider HKV Schmitz + Partner, based in Cologne, Germany, used a Liebherr LTM 1300-6.2 mobile crane to install a makeshift bridge over a main road in Germany.

The highway section of the A3 between Cologne-Mülheim and Leverkusen is undergoing an expansion project which will increase the number of road lanes lanes to eight.

Due to the increase in size of the new motorway, the existing bridges were not long enough, so new bridges were required. As a temporary solution during the construction work, a HKV Schmitz + Partner used its 300 tonne capacity Liebherr LTM 1300-6.2 mobile crane to erect a makeshift bridge overnight.

To erect the bridge the motorway was closed. The temporary bridge was delivered in four parts on semi low loader trailers. The heaviest section of the bridge weighed 41 tonnes and the longest bridge was 24 metres long. The LTM 1300-6.2 unloaded the sections from the low loaders before placing them onto prepared foundations. To carry out the lifts it was configured with 96 tonnes of counterweight. A LTM 1400-7.1 was also used to install another makeshift bridge over an adjacent section of motorway.