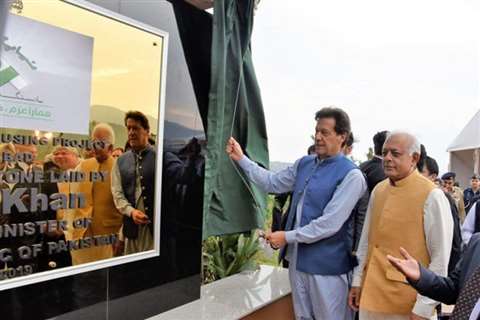 Pakistan’s Prime Minister, Imran Khan, has laid the foundation of a project that will build 18,500 new housing units.

The project will focus on delivering affordable housing for the low-income sector as part of the Pakistani government’s long-term goal to construct five million houses across the country.

Khan said, “Out of 18,500 units to be built in Zone-IV of the federal capital, 10,000 will be specified for the low-income group, who will be able to own a house through easy banking loans.

“The government’s role will be confined to facilitation as well as provision of land to the private contractors, who will execute the project as the government does not have sufficient resources to fund such a huge project.”

The demand for the new housing is predicted to be higher than the available units. Due to this, the government will allocate units through balloting.

Khan also said that the government would launch housing projects in other cities by engaging the private sector. “In Karachi, around 30 to 40% of people live in slums having neither any ownership rights nor the amenities like sewerage and others.”

In the province of Sindh, it has been reported that the government will offer around half of the slum land to the private sector. This land will be used for the construction of commercial areas and the building of more affordable housing for the slum dwellers.

Khan said that in Pakistan the poorer population struggles to afford their own houses primarily because banks do not provide mortgages to them. To tackle this problem, the government is in the process of drafting new laws to force banks to extend housing loans to the poorest demographic.