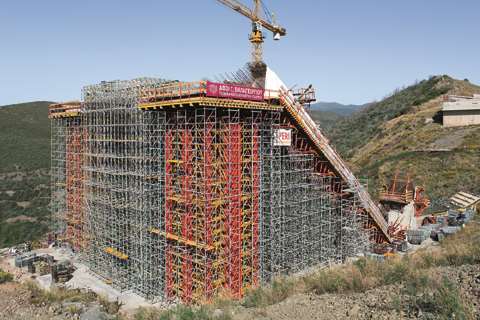 Peri engineers combined two modular construction systems to form a comprehensive load-bearing concept with heights of up to 20 m.

German scaffolding company Peri is providing a bespoke support system for the construction of a motorway bridge in Greece.

The T4 bridge will span a 390 m gap between Paradisia and Tsakona on the 160 km A7 motorway, which connects Kalamata in the south to Corinth in the northwest.

Two-thirds of the 22 m wide arched bridge superstructure will be suspended on a steel arch and realised using steel composite. For the northern bridge section, Peri is providing a pre-stressed concrete superstructure, which features a twin-cell hollow box cross-section. It is also supplying the relevant scoffolding.

The supporting element of the motorway bridge is a 30 m high inclined twin-pillar pier with an asymmetric V-shape. The support serves as both an intermediate support for the in-situ concreted carriageway and as a support and starter section for the steel arch.

The scaffolding is being used for the construction of the pier structure and reinforced concrete superstructure as well as for the temporary support of the bridge during the entire building project,which has been scheduled to take up to two years.

"Essentially, it is two modular construction systems combined, which transfer the high loads safely into the ground," said a company spokesman.

The Peri UP Rosett Flex modular scaffold system forms a spatial load-bearing structure for the piers, allowing the superstructure formwork to be formed, gradually increasing up to the total support height of over 20 m.

The Paradisa to Tsakona bridge is scheduled for completion in 2014.