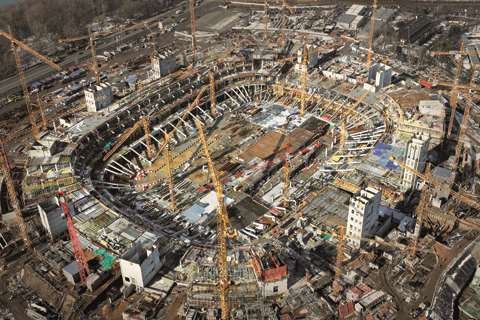 The Warsaw National Stadium under construction

German scaffolding company Peri has seven of its latest projects firmly in the limelight at present, having worked on the construction or expansion of seven of the eight football stadiums currently being used for the 14th UEFA European Football Championships in Poland and the Ukraine.

Peri has been working on ensuring German success at the Championships since 2009, when the firm began work on the construction of the Warsaw National Stadium. The 58,500-seat stadium was built using Peri scaffolding and formworks, provided by the Polish Peri rental park.

The Peri Up scaffolding system provided access, a working platform and load-bearing system for the construction team. Peri's Trio, Domino and Multiflex formwork systems were also used in the build.