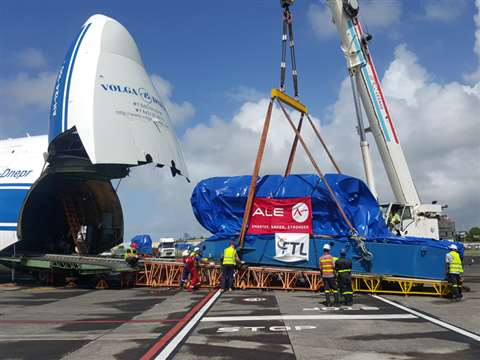 ALE loading the 57.2t power station engine onto the cargo carrier in Mauritius

Starting in February 2017, the first phase involved transporting the engines, weighing 57.2 tonnes, from Port Louis to the main international airport in Mauritius, Sir Seewoosagur Ramgoolam International Airport, using six axle lines of conventional trailers. Once all the engines had arrived at the airport they were loaded onto an Antonov AN-124 ex-military cargo carrier and flown to Ivato International airport in Antananarivo, Madagascar, where they were offloaded.

The next phase of the operation will now involve transporting the engines 36km along roads to the power station using self-propelled transporters. Propping material will be used to support and strengthen the heavy loads across the Imambo Bridge. Once at the power station the engines will be installed using a conventional jack and slide approach.

Sean McGibbon, Project Engineer for ALE who is leading this project, said: “By engineering a turnkey methodology to offload the engines from the aircraft and in tandem with Volga Dnepr, the assisting aircraft operator, it shows how ALE can adapt and be responsive to ensure the engines arrived safely and within schedule. Despite further challenges, such as two cyclones which caused delays, ALE carried out the first transportation phase of the project successfully and is ready for the next phase.”