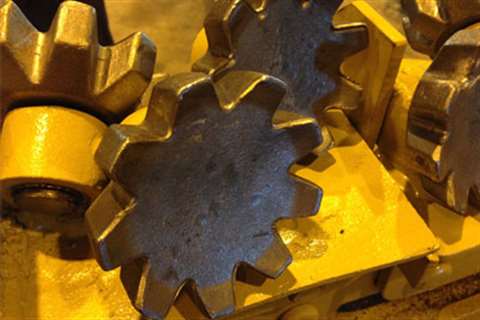 The Rolling Wedge Cutter from Philippi-Hagenbuch

New trenching technology has been revealed by Philippi-Hagenbuch which it said would improve material trenching and mining processes while improving cut size and reducing cutting dust by as much as 50%.

The Rolling Wedge Cutter, which is awaiting the award of a patent, was invented by LeRoy Hagenbuch.

The new technology is described as a solution for trenching and mining through challenging environments, with applications in general construction, road construction and utilities, as well as mining.

The company said the Rolling Wedge Cutter could be used in above ground and underground environments, and it claimed it could create time efficiencies and accomplish techniques that were previously thought very difficult, and in some cases, unachievable.

Philippi said the greatest benefit of using the Rolling Wedge Cutter was that 60 to 70% less energy was required. Instead of blasting material apart by exceeding its compressive strength through brute force, which has been the traditional method, the Rolling Wedge Cutter is said to place material in tension and pull it apart by overcoming the material’s tensile strength. It said that when put in tension, material such as concrete has just one-fifth the tensile strength of its compressive strength.

Because of that, the Rolling Wedge Cutter is said to minimise the challenges associated with trenching and mining through difficult materials such as concrete, concrete with rebar, frozen ground and pavement.

It is also said to cause less disruption to the ground underneath streets and roadways than backhoes and jackhammers forcing their way through pavement.

Philippi said there was no need to wait for the ground to thaw, allowing users to trench or cut through materials without jackhammers, saws or other cutting devices. It added that users who wanted to break up a chunk of concrete could just drill a small hole and drive in a Rolling Wedge Cutter.

The Rolling Wedge Cutter is constructed out of hardened steel and is available in various sizes, from 0.75 to 9in diameters. It can be outfitted with a number of optional tips to meet the specific needs of a project, and Hagenbuch said he was currently developing specific cutters for specific cutting applications. The width of the trench dictates the total number of cutters required.