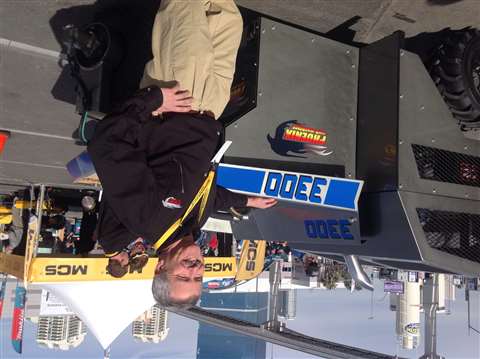 Stu Johnson, president of Phoenix Curb Machines, in front of the new PCM 3300.

Phoenix Curb Machines president Stu Johnson forecast an increase in sales of +25% year-on-year in 2014, as the manufacturer is poised to benefit from the continuing North American construction market recovery.

Speaking during the World of Concrete exhibition in Las Vegas, US, Mr Johnson said the company had plans to expand during the next 12 months.

"This year is our third year in business and we expect it to be better than 2013. I think sales will hit between US$ 4 million and US$ 5 million this year, so a +25% increase. We have a lot of customers in the US and Canada building infrastructure related to the oil sands boom, an area which has seen unbelievable growth.

"We are also in discussions with a company regarding creating a dealership network. We currently do all our sales in-house, and this company has a network of 320 dealers, so the deal would see us expand to the next level."

Phoenix Curb Machines had a number of new machines on its stand at World of Concrete, including the PCM 3300 all-wheel drive curb machine. Designed for medium curb and gutter jobs, the machine can pour up to 18 in (457mm) high and the same width, at pouring speeds of up to 9.2 m per minute.

Substantial South American order for XCMG
What is reported to be the largest single-batch export order in Chinese construction machinery industry over the past five years has occurred
Loading...
Previous Next ×